By Sadie - December 16, 2017
After Agonda we went to Benaulim for 3 nights, which is a very long, flat, white sandy beach. This does mean you must walk a bit between places, but it’s worth it for the solitude you get. 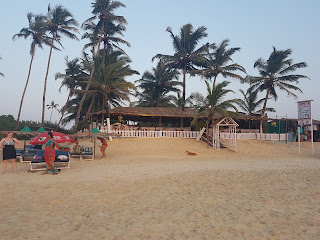 The place we stayed at was very laid back and run by a group of lads that preferred to sit and play on their phones than hound you for custom -This had its benefits and its drawbacks but all in all it was a very nice little place, just a shame the Wi-Fi was terrible. (Anthys Guesthouse)
We had a lovely couple from the Wirral in the room next door and they helped teach us a few tricks as had been coming to this area for over 7 years.
Most of our days seem to be taken up by swimming before it gets too hot, reading in the shade/ bar or a/c room for the hot bit and then back out again for sunset swims or drinks about 5:30. It’s not a bad way to spend your time and as we knew North Goa would be more active we embraced the lazy beach way of life.
We did manage to get a taxi to the big market at Margao town on Wednesday morning, which is a huge manic undercover market selling literally everything you can think of. You do get accosted at every turn by people trying to entice you in their shop but it’s amusing to hear what the different conversation starters are – The best one was after she learnt our names she asked me if Paul had a big willy! I’m sure I didn’t mishear as she fell about in giggles after she’d said it. 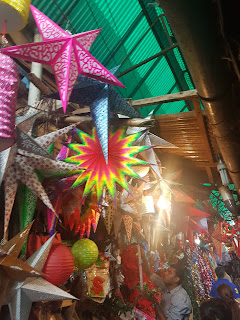 On the first night, we met a local guy called Shiva and it turns out he’s a bit of a local celebrity. He asks you where you live then rattles off your postcode plus the names of all the surrounding towns – Bishopbriggs, Shawlands, Mansfield, Derby and then he goes on to list their postcodes. He can speak fluent welsh and our neighbours said there is a youtube video out there of him somewhere.
I also discovered a cocktail bar called Firefly that had the best 80’s playlist playing loudly and Donovan the owner was practising his new Cashew Feni recipes. It would have been rude not to be a guinea pig for a few hours.😜

Next stop Anjuna in North Goa.