By Sadie - December 21, 2017
After Anjuna we moved the short distance down the road to Vagator, near Chapora. We arrived around 12pm during a power out at the hostel, but as we had little cash to pay with we had to make the 10min walk in the baking sun to the ATM.... Unfortunately they also had a power out so we had to walk to the next one (another 10mins away). That cash machine worked but had no money left in it! An Australian couple (Roz and Josh) were also doing the cash machine rounds and so the only thing to do was all of us to keeping walking to the next one (around another 2km). I did my steps that lunchtime!

Turns out Roz and Josh were staying at Jungle Hostel too and it was their first night in Goa, so we grabbed a taxi back to the beach to catch the sunset and have beers.
We had an amazing dinner at the Mango Tree next door to the hostel and then joined the others in the common room of the hostel. I'm afraid I had a few beers too many and was sent to bed at 11pm (I blame the kingfisher strong beer). Found out the next morning I'd also put on someone else's sandals. 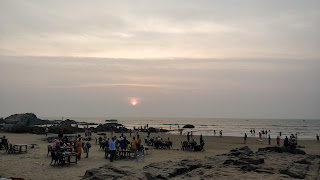 Next morning we had been told that a friend of a friend owned a guest house nearby, and they could arrange back water crocodile cruises, so we walked down to the guest house and found Anthony. He was really nice and when he found out we were Cotton's friends we sat us down, gave us water and chatted. We booked a crocodile cruise for the next morning, leaving at 7am.
Unfortunately Paul really started suffering with his chest infection after the uphill walk back and he pretty much stayed in bed for the rest of the day. I managed to get him up for dinner but he wasn't feeling very social so went back to bed straight after and only had 1 beer! I went and had a few drinks with the others in the common room where I learnt some Bangra dance moves and talked with the colourful characters staying at the hostel for a couple of hours.

Paul really wasn't well the next day either so we didn't end up going on the crocodile cruise and instead I walked off to find him a chemist and some medicine. The third pharmacy I tried was open and also had a Dr next door, so I described his symptoms and got him a 5 day course of antibiotics. The drugs cost 65 rupees, which is about 70p!! 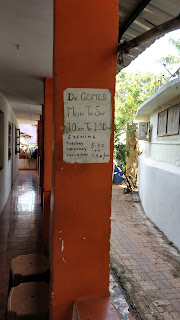 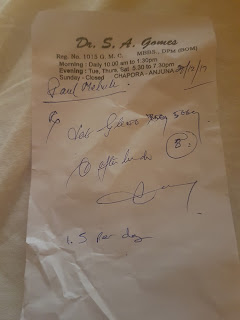 We spent the rest of the day planning the Myanmar bit of our trip and as Paul felt a little better that eve we went out for dinner and had a few drinks in the common room.

It's been a real shame that Paul wasn't feeling very well this past 2 days but from listening to the hostel crowd, we only missed some messy drink fuelled nights and we would have needed a scooter to see more of North Goa, so we'll be back another time to explore more.

By paultrademark - June 04, 2018
Can't believe we have been away exactly 6 months already, seems to me as if it has flown in! 😯 I just wanted to post this interactive map that I have been using to plot our route so far, it has a point for every place we have had overnight stay or a flight transfer. It's only when I look back over it, then does the time feel slower and I realise it was a long time ago that we swam in the beaches of Goa! Here is a link to some of the stats -  Click here View Full Size Travel Map So what is the plan for the next couple of months and beyond? Well after our 8 weeks in Indonesia, we fly to Ho Chi Minh City and travel up Vietnam, then probably over into Laos and then into Cambodia. Then money permitting, we may go back into Thailand and do the northern part, although we did originally plan to be away a year, it's looking more likely it will be 10 months or so. x
More Rambling »

So the first day has been at Vasco de Gama. We only picked this place because it was so close to the airport and when you land at 1am all you want is a nice bed for a couple of nights. The hotel is really nice, we have a double bed each, a balcony, plus a toilet/wet room complete with built in viewing window. We slept most of the day and then went for a wander into town in the afternoon. The roads are chaos and everyone was staring at the 2 crazy westerners walking along side the cows, goats, dogs and locals.... There are no tourists in this town and everyone wants to shake your hand and say 'Hi'.  Sadly town at that time is mostly industrial car workshops, closed pharmacies, closed bars and hardly any people but on the way back to the hotel we found a dingy little bar with 2 beer fridges and some locals having a curry and pints. 2 kingfishers later and after they started closing all the shutters and doors with us inside, we thought it best to go back to the hotel.
More Rambling »