After a stressful moment in Yangon station where they said the train we wanted was full and we couldn't get tickets, then mysteriously managed to sell us 2 on the exact same train, we were on our way to Kyaikto. This was slightly off the normal tourist route to one of the must sacred Buddhist worship sites in Myanmar – Mount Kayiktiyo (aka the Golden Rock).
When we got off the train there were only two other tourists that we could see and we and lots of locals were all ushered to a large roundabout in the carpark to wait for the taxis that take you up to the small town of Kin Pun. These taxis are flat bed trucks with 3 benches squeezed in and they fill them to overflowing with people, luggage and shopping, all for the price of 500k each (26p). In hindsight I wish we'd put our luggage on the roof rack as once you get everyone on the benches there isn't an opportunity to get you and your luggage out over everyone and it meant we sailed past our hotel and down into the town. It wasn't really a problem as it meant we could have a nice cold beer and watch the locals go about their daily business and then we walked the 10 mins back up the hill to our hotel. 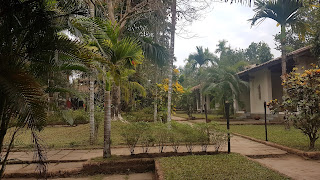 We were staying at the Golden Sunrise hotel, which looks beautiful with well maintained gardens and small bungalows nestled in the trees. By this time, it’s 3pm and not worth trying to go to the rock so we stayed in the cool shade and relaxed and we went out again when it was cooler.
Town is a mixture of shops selling bags, hats, bamboo guns and general food sandwiched between orchid stalls and restaurants. As not many tourists come here we found Tripadvisor and Google to be very light on restaurant recommendations, so we picked a busy looking place for dinner called Myint Tar Lwin, it was only after we ordered we realised that all the other 'customers' were actually family members hanging around. The food was delicious though and the owner spoke very good English so we had made the right choice.

The next morning we were up early to try and beat the heat of the day. Breakfast was a simple affair of toast and eggs with no meat to be seen and the sulkiest lads serving I’d met in my travels, but the French toast was gorgeous and watermelon was a new favourite addition to our breakfasts. Getting to the mountain and the golden rock is done by bus, or huge flat bed lorries as I know them, they are lined with steel benches and you can get about 5/6 people along each bench but when you add kids and bags it makes it a tight squeeze, also if you sit in the front bench although you get more leg room but you just have the back of the cab and a huge sheet of metal as your view for the entire journey – which is what we had. The bus is probably only going 20-30 mph up the mountain but when you add in 180-degree hairpin bends, ups, downs, twists and turns, none of which you can see coming the feeling is just like being on a rollercoaster. When the bus pulled in to a cable car stop just over halfway up that would take you to the top without the motion sickness I gladly accepted, yes it cost us three times as much for a short trip but I’d got off the bus feeling queasy and wasn’t getting back on in a hurry. 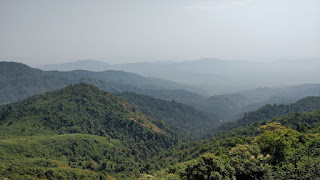 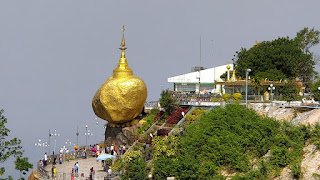 The golden rock main attraction was a short walk further up from the cable car stop through a street lined with sellers and people. Every now and then you would get a view of the precariously balanced golden rock, which looks like it's ready to topple off the 1100m tall mountain at any moment. I was a bit underwhelmed by the actual rock, I know it's an important Buddhist pilgrimage which males only can place gold leaf upon but I wasn’t feeling it, but the 360-degree views of the Shan mountains more than made up for it. A highlight was the delight and giggles that came from 2 female Buddhist nuns when I allowed them to take a selfie with me. 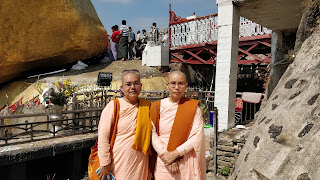 The only way back down was getting back into our flat bed buses but this time I choose a back seat on the edge so I could see some of the road in front. It was still a white-knuckle ride but I didn't feel as sick now I could see the turns coming.
Once back at the base we stopped for a nice cold beer in the same place that we'd stopped yesterday and watched the world go by before returning to our hotel for the hottest part of the day. This was not the best time to discover the fridge in your room didn't work, but even though we were paying more than normal for this hotel there were quite a few things that didn't work or worked badly here. The food however was not one of them as we had a very tasty in-house dinner that night.

Next morning we were moving on to Mawlamyine but the train didn't go into midday so we had a lazy morning at the hotel, then back on a bus and train to watch more of this country’s beautiful countryside go by. This train seemed to go through more little villages that are right next to the tracks which enables all the children to run out and wave to the train (I forever called them the railway children after that) ... This is actually little more than an effective begging method as most people throw food and money out of the window for them to collect, they were very cute and it was very handy way for me to clear out the sweets I’d been carrying about for a while but it was heart-breaking not to be able to please all of them, and some looked disgusted to be given sweets not money. 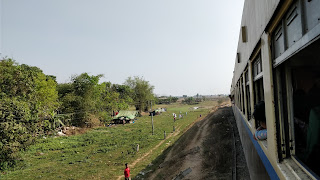 Darkness started to fall and we finally arrived in Mawlamyine, as our motel was only 10mins away, we staggered off with our backpacks on down the hard shoulder of the busy main road, we were staying at Pinnlon Pan Motel, which is a bit out of the way for the main restaurants and markets but is very handy from the station.
The owner and his merry band of lads were very friendly and helpful, and all came to help evict the biggest wasp/hornet I've ever seen from our room when we asked. The owner then orders us a taxi to go into town and says if we tell the driver what time and where, he would meet us and bring us back as well. This sounded perfect and we arranged a 10:30 pick up from the night market. After an overpriced and clumsy meal at Cinderella’s restaurant (honestly don't know how it got so highly rated on TripAdvisor) we slowly walked back to the rendezvous point and waited.... And waited and eventually realised something had gone wrong. We'd already turned down about 4 other taxis saying we were waiting on our guy but now the street was getting quiet, apart from one man and his dog on a motorbike going up and down. 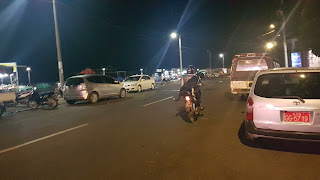 Then up pops this older guy on his motorbike and says he and a friend can get us back on their bikes no problem, and so our first motorbike taxi ride takes place and it was actually a lot less scary than I thought.

The next day we had a Myanmar breakfast of fried rice served on a table outside our room and then we headed off to the supermarket in search of toiletries. We spent the day shopping and snacking on bakery items in the mall and doing research on temperatures and rainfall for the next stage of our trip. For sunset we took a stroll up to the golden pagodas on the hill and enjoyed a wonderful view across town. It's not one of the most beautiful pagodas that we've seen and we might have started to feel a bit 'templed out' but there weren't any crowds and surprisingly no sellers so it was a nice stroll and view. 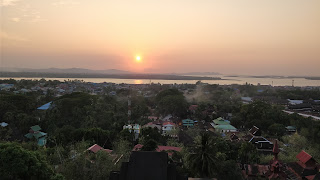 For dinner we decided to go to another TripAdvisor recommendation along the river but after arriving it looked so sad and empty we decided against it, this was probably where our evening went a little awry.
I'd spotted a very busy Tiger beer bar a short walk back and convinced Paul that if it was that busy it must be good! It started so well with Tiger beer and a picture menu so the language barrier wasn’t as much of an issue, but after our waiter seemed to have problems with Burmese words and pictures we started to have doubts, still I won 2000 K on the Tiger promotion tombola so it was still good.
My food arrived and whilst bland it was exactly as I’d ordered, Paul who had ordered Deep Fried Chicken was given a bowl of soup! We tried to say this wasn't what we ordered but the waiter was adamant that there was chicken in the soup and hence this was deep fried chicken. After about 2 mins of us being a bit confused a different guy comes out of the kitchen with another huge bowl of soup, he places that in front of us then runs off. By this time, I've finished my plate and Paul hasn't eaten a spoonful of either soups so we again explain the situation but this time just ask for the bill and we will go.
Even after showing them the pictures in the menu we couldn't get them to explain what soups we had been delivered or why the fried chicken wasn’t fried, or anything like the picture. We walked all of 10 steps to the bar next door where Paul managed to get the nicest Thai green curry and surprisingly some cocktails before we caught another two motorbike taxis back to the motel.