By Sadie - February 06, 2018
Getting up at 2:30am for a 10hr train journey to Hsipaw was painful, but as it is known to be one of the world's top train journeys we were both looking forward to it. As we'd be back at the hotel in a few days they agreed to look after our big backpacks so we could travel light with just small bags, so with these packed with a few days clothes and snacks for the journey we set off. Tickets purchased we followed the other tired looking backpackers to the only train in the station and found our seats in the ‘upper class' carriage. This means you get cushioned reclining seats instead of wooden benches and as it was only about £2 each it was a luxury we splashed out on. 4am came and the train trundled off through the darkness, sunrise isn't until 7ish but sleep is pretty impossible even if your seat recline lever does work. The train judders from side to side, pretty violently at times, and the noise as it clacks over the rails is deafening. 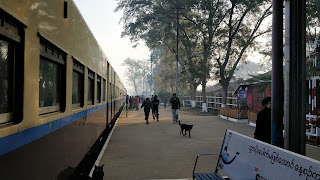 After 4hrs or so we reached the main station of Pyin Po Lwin. At this station another upper-class carriage is added and a lot of tourists climb aboard. As we were here for half hour or so we could stretch our legs and Paul came back from one wander with two bags of coffee, complete with straw so you could drink them – hot, strong and sweet it was actually delicious. All seats now taken we continued through the beautiful countryside towards the most famous part of this journey the Gokteit Viaduct. Pictures don't really do it justice and they don't convey the fear that grips you as the train slows down to a crawl and creeps along the massive steel structure but with everyone in the carriage swapping seats to get different views it was an amazing part of the journey. Turns out a lot of people have only got on the train to do the viaduct cruising as the train half emptied at the next stop. 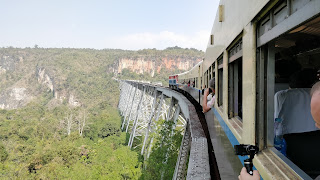 At about 4:30 we arrived at Hsipaw and were greeted by a person from the hotel, bundled into the back of a truck and taken to the Tai House resort. We'd spent a bit more than normal for these 3 nights as this place had great reviews and looked beautiful, we weren't disappointed as they upgraded us from a superior room to a deluxe bungalow. A quick shower and change and we were back out to check out the town. Hsipaw isn't big, you can walk the entire town in an hour, so we stayed local and ate a fantastic meal in a river side restaurant before heading home.

The following morning, we got up nice and early and went for breakfast. Breakfast at this hotel is a feast with as much as you can eat of spicy soup, noodles, fried tofu, eggs any way, toast, fruit, pancakes and an assortment of delicious rice based cakes and snacks. It was amazing! To burn this off we thought we'd go to a waterfall, which was an easy 1hr walk according to the guides and map.........Lies!! 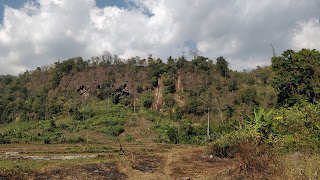 The walk was beautiful and took you through the farm land just outside of the town. Pretty soon all you could see was rice paddies, banana trees, little farm houses with streams and rivers crisscrossing the land... Oh and the waterfall still way of in the distance. 2hrs later we made it, there wasn't much water in the waterfall but it was still a very pretty and in a next-door Shan Nat shrine lived a very friendly kitten that we spoke to whilst preparing for the walk back in 32-degree heat. Having made it back to town a few well deserved pints were drunk and a lazy afternoon of reading / napping commenced.
The next day we went to a small local temple, then another walk to a cluster of ancient pagodas known as little Bagan before finishing off at the Shan palace. The palace is more of a big house but there you get an interesting talk on the history of the Shan royal family by Mr Donald, who is the nephew of the last Shan prince.

That marked our last day in Hsipaw and it was genuinely sad to be packing to leave the next day, we'd both fallen in love with this quiet little town and I especially loved the local little wooden houses on stilts, with lush green gardens all of which were normally kept immaculately clean. We had another gorgeous meal at the guesthouse that evening but as I was now coming down with a snotty nose and fuzzy head I went to bed quite early. 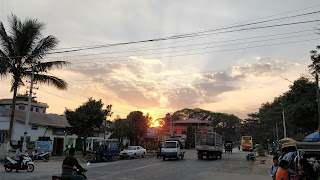 The next day we had booked for a shared taxi to pick us up at 12, so we could get back to Mandalay at a reasonable time. I wasn’t looking forward to this 6hr journey as I suffer from car sickness but I'd paid extra for the front seat so fingers crossed I'll be ok. The taxi showed up with two teenage Burmese girls in the back and we all set off, with the girls shovelling handfuls of sweets into their mouths. Never have I been so glad to have a front seat as the road up and down the mountains were very twisty and sickness inducing (as one of the poor girls in the back found out). Eventually we returned to our Mandalay hotel and were reunited with our backpacks and clean clothes, I was now in full blown snotty nose / hacking cough mode and as we had an early morning taxi booked for the next part of our journey, we ate locally and had an early night.