By paultrademark - February 05, 2018
So after our short sleep, we decided just to eat in the hotel that evening, plus our room was on the 4th floor and just down the corridor was the Sky Bar. It had a nightly free cocktail per guest, which was either a rum sour or gin sour, so we went for the gin one and it was delicious.
They also put on some entertainment in the form of a woman who played a wooden xylophone for an hour, followed by a puppet show which is a big thing over here and was interesting at bits!
After dinner we went for a little stroll, but Sadie wasn't feeling 100% so we had a fairly early night. 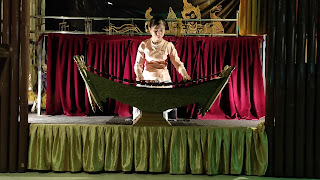 Sadie had bought a SIM card at the airport as in general the WiFi in Myanmar isn't very good, and the data bundles are very cheap (£5.50 for 5.5GB per month). However we couldn't get her phone to load any pages, and despite trying all the tricks we both knew, it still didn't work.
There was an Ooredoo shop not far from the hotel which is the network provider, so the next morning we went to see if they could fix it. After some time, the young girl and another boy in the shop were also struggling to get it to work. The SIM worked in another phone fine, and other SIMs also didn't work in Sadie's phone, so we put it down to her One Plus 5 settings.
The girl gave us an address of a mobile sales/repair place to take it to, so off we trundled across the other side of town to find it.

After a quick discussion with one of the young girls in the shop, a boy took us swiftly away to an older man who started to play with the phone. He soon found the issue and it turned out to be a setting for Chrome that Sadie had switched off to save data whilst on mobile data in the UK!

In the afternoon we took a walk through town to check out the Royal Palace, which is in a huge square surrounded by a river which tourists can only enter via the east side. After we paid our 10,000kyat (£5.30) for a 5 day tourist pass which gets you in various other sites too, we went in to explore. It's a lovely peaceful area with lots of pagodas, temples and a watchtower.
The plan after that was to head up to Mandalay Hill for sunset, and on looking at the map, thankfully a local taxi driver stopped and offered to take us there via a couple of other sites we wanted to see, wait for us and take us back to the hotel for around £7 which was good value for what we wanted to do.

We stopped at a couple of pagodas and a teak monestary before heading up the winding road to the top of the hill. The view from there was spectacular and after sunset we headed back to the hotel to get freshened up for dinner. 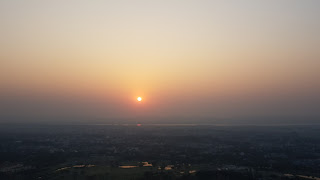 We had picked an Italian place just round the corner from the hotel, but on discovering it was shut, we quickly found another local place recommended on Trip Advisor and headed there.
We ordered a couple of main meals and along with that came around 7 or 8 side dishes, some of which we have no idea what they were, but all tasted lovely and we ate as much as we could till we were stuffed.

The next morning we had arranged for a private taxi to chauffeur us around the 3 ancient cities surrounding Mandalay, which are Amarapura, Sagaing and Inn Wa and ending with a sunset at the worlds longest teak bridge at U-Bein. This was 45,000kyat (£23) for us both and was a full day out from 08:30 - 18:30, so good value for money. 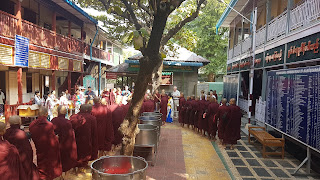 Our driver didn't speak much English but was helpful and the car was comfy with air-conditioning. It was a full on day of pagodas, temples, monestaries, stunning scenery and the U-Bein bridge was beautiful as the sun set in the distance. 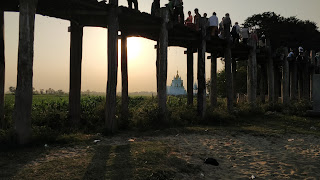 But by after that point, we were fairly tired out tourists, plus we wanted to get to the supermarket for supplies for the next mornings early train to Hsipaw.
Our driver dropped us off at the supermarket round the corner from the hotel, and we were pleasantly surprised at the size and range of products there and we managed to get all we needed. Much different to the supermarkets in Nepal we went to!

By then it was around 7pm so we went back to the hotel for dinner (and another free cocktail), but sadly we waited around an hour to get our order, so it was straight to bed as we had to get up for 3am for the train.