By paultrademark - April 05, 2018
We had decided to fly from Langkawi to Penang, as not only did it cost around £30 for both of us, the Soluna guest house we stayed at was near the airport anyway, plus the reviews I had read of the ferry service were less than impressive. An easy taxi to the airport mid-afternoon got us there a good hour or so before our flight, and with the added experience and ‘convenience’ of having to self-print boarding passes & baggage labels and then self-scan your luggage onto the belt and away it went with no human interaction required (well apart from all the people who used to do all that for you, who are now there to assist you to do it seemingly!)

It was a 40-minute flight, so not even long enough to have a trolley service, though some people had pre-ordered an inflight meal…really?
We soon touched down in Penang and after a slow taxi journey through rush hour traffic, we arrived 45 minutes later at our hotel for the 5 nights, Hotel Mingood which was in the main town called George Town on the island.

Except there was to be nothing ‘good’ about this place. The first room they gave us stank of stale cigarettes and despite it being classed as a ‘non-smoking’ room, there was an ashtray in it. Also, the cleanliness of the room was questionable, so we went to reception and got another room allocated. But this one was a twin room, so yet another trip to reception where they told us they didn’t have any more double rooms available. After a short discussion, the receptionist managed to find us a room, but apparently only for the one night then we would either need to move rooms again or we would need to speak to the manager who conveniently wasn’t available at that point. We went to look at the 3rd room, and yes it was a double but also stank of smoke, had an ashtray and was even dirtier than the 1st room.

By this time both of us were fed up and as we had already paid in advance for this hotel and after checking stuff online, speaking to Agoda customer service via live chat, they thankfully cancelled our booking from the following day, so we just had to pay one night’s charge (£15). We swiftly used the credit amount they issued to book another hotel nearby, so went down to reception to advise them of that and left to walk round to our new hotel, which was far better for a similar price anyway. 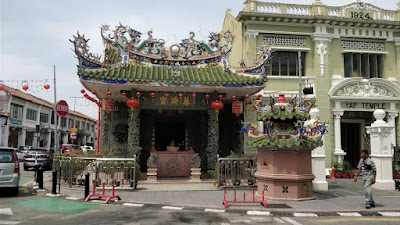 One we got unpacked, we headed out for a walk and went down towards Chinatown which was strangely quiet and we eventually found Junk Bar, which we had burger and chips and then went for another walk about. Malaysia isn’t that cheap for beers in pubs, but we had read about a place called Antarabangsa Enterprise, which is basically an off-licence that is popular with the locals and tourists and they sell the cheapest booze in town and have tables and chairs outside where everyone mingles and chat away all night. It makes for a great spot for people watching, exchanging travelling tips with tourists and gaining some local knowledge and history from the locals. 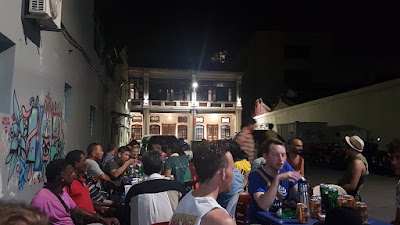 It was a Friday evening we first went here, and the place was rammed with I’d guess 150+ people sitting drinking, some guy was selling Shisha plus another local came around with a takeaway menu from which you could order food and have it delivered to your table! We stayed for a few cans and then went back to the hotel.

The next day we just went for a walk around the town, visited a mall for some shopping and just chilled out and had dinner at a place called Laksalicious where we had a local dish called Laksa Lemak, which is a noodle based spicy coconut soup. Sadly, I found this a bit too hot for me and didn’t eat much of it, hence the craving for junk food so we ended up at KFC later that evening. 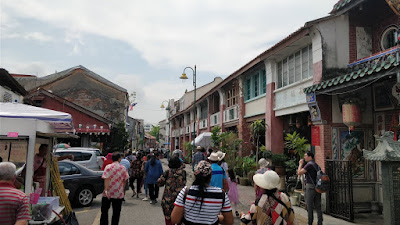 On the Sunday, we went a walk-through town visiting places such as Armenian Street and the surrounding area where plenty of street art is on display including over 50 wrought iron sculptures mounted on walls and graffiti. This is a popular tourist spot and with snap happy Oriental (mostly) tourists with no spacial awareness, getting some pics with no-one blocking your view is a difficult task! 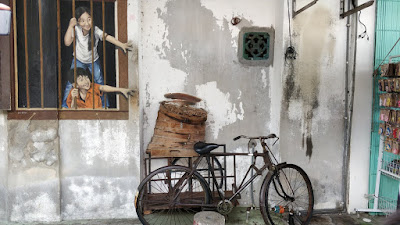 We then went down to the Clan Jetties of Penang, an area featuring traditional rustic houses on stilts, sadly most of which are now turned into tourist shops and cafes.
Another place we visited was the Upside-Down Museum, although it’s not actually a museum, but still a fun place to visit. You are shown round the various rooms which are all set upside down, then you are directed on how to pose by a member of staff who then take a photo of you and then you get ushered into the next room. This repeats all the way round, there is probably about 15 different rooms with various themes, some were really good and some are just weird! (See pics link below) 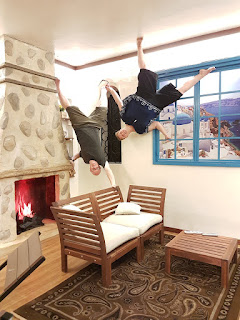 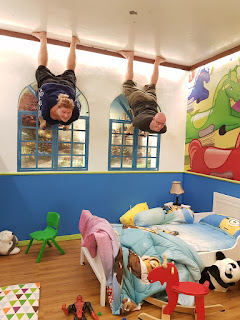 At night we went to a highly rated restaurant near our hotel called What The Duck? where we had an amazing 3 course meal, surprisingly consisting of duck and even some of their desserts included it although we just opted for brownie and cheesecake! 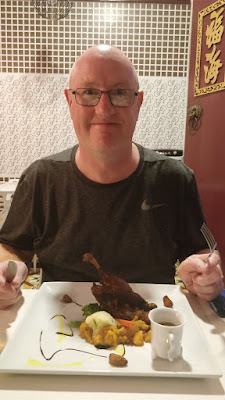 The following day was another lazy one, I spent a bit of time doing some planning and booking stuff for the rest of our time in Malaysia and then went out late afternoon for some lunch and then a couple of beers. We had planned to go to a local night market for some street food for dinner, so we stopped at the off-licence again for a couple of beers. We got there at around 5pm, so got a table easily enough. We were soon joined by a few locals, then a female from Estonia who was on a visa run from Thailand, a young lad from Brisbane whose parents were over visiting him and taking him home, an older American guy who lives out here 6 months of the year and a couple of guys from Singapore who moved here as apparently it is shit for them in their own country!
This then turned into a 6-hour session where we had many beers, ciders, red wine (2 bottles) and some white spirit pretending to be gin! We also missed the night market, oh well… 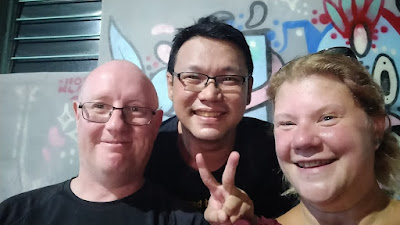 Needless to say, the next day was a bit of a right off, we had planned to go up Penang Hill but we were both not feeling up to it. So, I went out to the local supermarket, got some breakfast and we spent the whole day in our nice air-con room looking a bit more into Singapore, since we got some tips of the 2 guys we spoke to the previous evening. 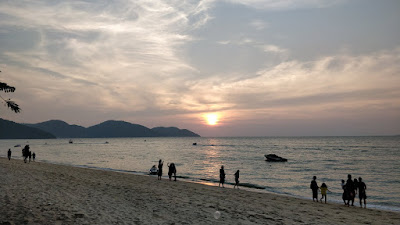 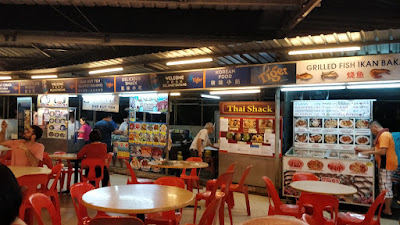 At night we went by taxi to Batu Ferringhi which is on the north coast of the island of Penang and has a night market on every evening. We wanted some street food and found a little market area where we got some Char Hor Fun which is a bit like a Chow Mein and then had some delicious Chicken Tikka and butter naan. Then it was back to the hotel to get organised for another travelling day tomorrow, this time a 3-hour bus trip to Ipoh on the mainland.