Yay, we were off to a new country but first we had a day of traveling and airports to look forward to. Starting with a midday flight from Tawau to Kular Lumpar, then 4 hours wait, then an evening flight to Indonesia.
We decided to start our travels in Jakarta, as it’s got major transport links to everywhere and we hadn’t decided where in Indonesia we wanted to go. Just to add to the general travelling complications, Ramadan had started a few days earlier and as Indonesia is over 80% Muslim we didn't know how this would impact us. In fact, so far it hasn’t affected us that much but traffic was greatly increased around 5pm as everyone rushed home to break their fast. We also had to remind ourselves to not drink water openly on the street or smoke in case we caused offense. Most restaurants are open all day but everyone eats and drinks inside away from general view, some smoking areas are closed and alcohol is not served until evening or is served in teapots or coffee cups.

Back to Jakarta and we were staying in the Favehotel in Cideng, Central Jakarta. Getting there from the airport was interesting as we landed about 2am, grabbed some cash and headed out to the chaos of taxi touts. We wanted to find a place to get a Grab taxi but between the hundreds of taxi only lanes and the construction work going on we couldn’t find a safe place, so had to get into a metred taxi to get us to our hotel and they said it should be about 250k rupiah.
We’d heard a lot about the taxi scams in Jakarta so tracked our progress on google maps, and sure enough watched the turn off for our hotel sail by, and the next one wasn’t for ages. We told our taxi driver he’d missed the turning and he slowly wound his way back to our hotel adding on about 50k to the meter. We refused to pay the extra and although that didn’t go down well to begin with, when we took his taxi reg number and mentioned police he quickly changed his mind. 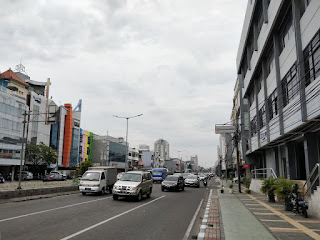 The hotel itself was very nice. We had a clean, large room, a buffet breakfast each morning and attractions within walking distance.
Obviously, the next morning was a late one we got ourselves up just in time to get breakfast at the hotel, then went out to get SIM cards. Paul had read that recently this had become a bit of a nightmare as the government had put a stop on all unregistered numbers. This had effectively cut off easy tourist SIM cards as well as half the population of Indonesia.
The only way to get one was to go to a special store, buy a SIM card then register it with your passport. This could take up to a few hours depending on how busy the shop was. That particular morning it was very busy. We explained to one shop worker that we needed to buy and register a SIM, so he sent us outside to a pop up stall selling SIMS. They couldn’t sell us a SIM unless we were registered!
We went around in circles for about 30mins, trying different providers and talking to different people until eventually we got a nice lady from Telkomsel to help. She got us SIMs and then convinced the girl on the stall to register them for us. I did feel guilty that we had skipped the queue but with such a daft system in place I think they realised that we’d never leave unless they helped us out a bit. It still took about 1.5 hrs.

In the afternoon we walked around the Old town square and stopped for a drink in the beautiful Café Batavia, which was built in 1805. It’s a popular tourist spot and is priced accordingly but it’s a lovely colonial building. We also took a walk to the Port where we saw the traditional wooden sailing ships being loaded and unloaded. Getting back to the hotel took over an hour, which was mostly because of Ramadan traffic and it was a learning curve for us to stay off the roads at that time.
The mosquitoes in Jakarta are vicious and plentiful, I had multiple bites from the first few hours and although there is no Malaria in the city there is Dengue fever and they are soooo itchy. We made sure to slather ourselves in repellent at any time of the day from then on. 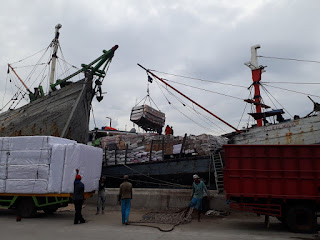 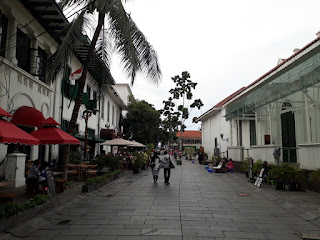 That evening we couldn't decide where or what we wanted to eat, so went for a wander to inspire us. The streets are still very busy but now the pavements are also busy with little food carts selling amazing smelling food and lots of people chatting and milling about. There is a noticeable amount of people now smoking on the street. We ended up in a Pandang cuisine restaurant (Resoran Garuda Sabang), that normally just delivers a small plate of everything they cook (which is a lot) to your table and you pay for what you eat. As neither of us can be trusted not to eat what was put in front of us, they showed us to the serving area and allowed us to pick a couple of dishes. It was nice and as we’d stuck to 3 dishes very cheap.

The following day we went exploring and ended up at the Monas tower, which is the 132m high national monument. Inside you learn a bit about the history of Jakarta, the Dutch that occupied it and the independence they claimed in 1950, before heading up the top for some views of the city. Dinner that evening was at the posher restaurant Imperial Chef, we had Dim Sum to start and then the most amazing Pork in honey (you may spot a theme – I love pork). We then found a very reasonable priced Fubar selling large bottles of Bintang beer for 40k rph (£2.15).
One thing I had started to notice in Indonesia is how friendly everyone was. Everywhere you go you get calls of Halo Mister and questions like ‘where do you come from’, ‘where you are going’, ‘what are you looking for’ echo as you walk up the street. It made me want to learn general greetings and polite conversation in their own language which is something I haven’t felt inclined to do since Myanmar. 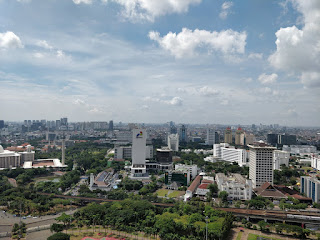 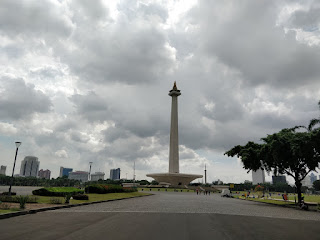 An admin day was overdue as we still hadn’t booked anything for when we left Jakarta and as it was only a day away - so Friday was spent researching and booking places, looking into Malaria tablets and shopping. It was also the Anniversary of our Handfasting last year at Bearded Theory festival, so Skybar cocktails were required. We went to one they’d aptly named Skye bar, where we had to buy a 250k rph (£13) voucher for drinks before you go up. Due to a slight communication / Sadie understanding issue we ended up with 2 vouchers plus they don’t serve alcohol until 7pm (not sure if that was a Ramadan thing), so we had a 30 min wait for our celebratory drink. Due to the voucher mis-purchase we ended up having two drinks each but they were a welcome indulgence as I’d not had an Espresso Martini in what felt like forever. The evening went slightly awry as we couldn’t find a reasonably priced steakhouse, which is what we’d both decided we fancied, so we settled for a German restaurant for steins of beer and more pork.

The following day we left Jakarta on a train…..Yay! It was very busy at the station and the system they have is you print your boarding pass at a machine, then queue for security before heading to your platform. Due to the traffic on the roads getting there we only had 10mins to spare and with the amount of people going through security we started to panic about missing the train. We didn’t though and I was quite excited to be back on rails and not flying or getting a bus. The train was heading to Bandung up in the hills of west Java, a town boasting a much cooler climate and great food. The trains were modern and air-conditioned with comfy reclining seats, clean squat style toilets and a refreshments trolley. The closed carriages made getting a good picture of the passing jungle and farming terraces tricky but just looking out watching it go by was great. After about 4hrs we arrived at the station and walked down the dusty road to the busy main street which was lined with market stalls, food carts and motorbikes. Here the hails and Halo Mister started up again as we walked the short distance to the Pasar Baru Square hotel. 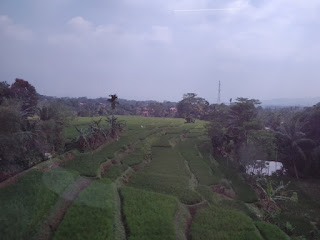 Bandung is an odd little town. During the days the streets are heaving and the roads are chaotic but then after dark the streets are left to the many homeless and a few taxi drivers. This was the first town where we were told by a resident to be careful walking around after dark. I never felt unsafe even though we often walked around after dark but I was surprised by the amount of homeless of every age and gender.
Our hotel was on top of a mall and was another clean and comfy place to call home for a couple of days. We found Braga Street, which the city reviews call ‘backpacker’ street and wandered around looking at the arty cafes, food stalls and what looked a music event setting up. Then we stopped at a busy Indonesian bakery called Braga Permai Resto for dinner. Here we had tasty rice, satay and even some beer served in a china teapot and cup – looking round there were a lot of tables having pots of tea that evening.

The following day we went to the area around the Gedung State government building and walked around the streets there. As it was a Sunday most things were closed, but it’s nice to see the architecture. We visited the Geological Museum which had some signs in English but most of it was in Indonesian, the rocks from this volcanic region are pretty cool though and don’t need explanation. Students from a nearby school were visiting and were desperate to get a picture with us. I generally hate having my photo taken, especially in this humidity, but I had come up with a rule - if they have the guts to ask (a lot don’t) then I would stop and have a selfie with them. I wish I’d got a picture on my phone of this group of kids at the museum as they were really fun, but as soon as a couple had been taken they were whisked off by their teachers. 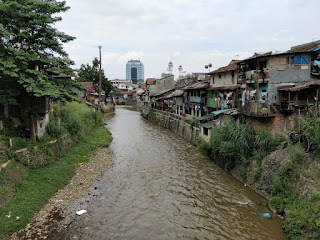 We wandered back along the streets and through the city parks station to print our boarding passes for the following day. It turned into a much bigger deal as their computer system was down and after it crashed several times they diverted us to the normal cashiers to print. That evening we ate Chinese at the Hong Kong restaurant in Chinatown. The food was delicious and the guy there spoke excellent English so sat down to chat to us for a bit about our travels. There was so much food that we asked for the leftovers to be packed to takeaway, which we then gave to a homeless lady we passed on our way home.

We were leaving early the next day to go to Yogyakarta (or Jogjakarta), so packing and an early night was needed.