Never leave your bags on the floor of public transport in South East Asia. I feel like we should have already learnt this lesson but clearly, we hadn’t.

The transport from Kampot was via the Ekareach Express minivan and only cost about $8 each. The van was clean and well maintained and if it hadn’t been for the young girl directly behind us falling asleep and dropping her coffee everywhere, it would have been quite a smooth trip.
Sadly, Pauls day bag containing all documents, laptop etc was on the floor and managed to mop up at least half the escaped liquid before we spotted it.

We arrived at PP about mid-day and had opted to stay 1 night at the Teahouse Urban Hotel, which was slightly posher than the last place and offered a decent breakfast for £25.
The following day we were booked on the 9:45 Phnom Penh Sorya bus to Kratie which Paul had booked online, so we made our way to the departure office and got on a slightly tired looking big bus with a handful of Cambodians.
The entire journey took about 7 hours but after about 4hrs we had dropped everyone else off and Paul & I had an entire huge bus to ourselves. This is when we should have heeded the lesson we’d learnt the previous day, as after going down an especially bumpy wet road we noticed brown water washing around our feet. The wheel arch by our seats had got a split which was now allowing all the muddy road water in and once again Pauls day bag was mopping it up. 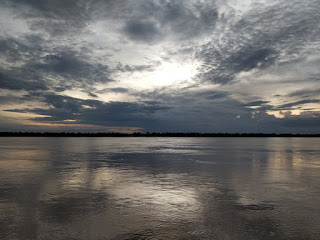 Arriving in Kratie was a little like arriving in a ghost town as there was hardly any shops, bars or people about but we’d booked a hotel called Le Tonle, which was a short walk from the river. Here we thought we were slumming it with a double bedroom with a shared bathroom but as we were the only guests what we really had was, an entire upper story with 1 large a/c bedroom, 2 huge bathrooms and an outdoor balcony!
A quick walk along the river at sunset confirmed our suspicion that there wasn’t much in this town and the 2 places we’d earmarked to try for dinner were closed. We grabbed a couple of beers for $1.50 at Jasmine Boat restaurant and then wandered back through the streets looking for food.
Eventually we stopped for dinner at an empty but open restaurant called Mlub Putrea where the lady proudly told us she makes all her own noodles fresh every day, seemed like a good enough reason to try them and I can confirm they were delicious. 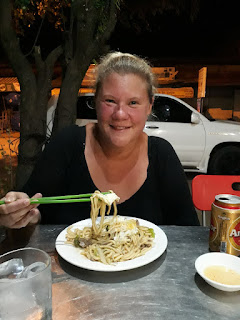 The main reason we’d stopped here is because they have the Irrawaddy River dolphin just up the river a bit and it also broke up the journey into Laos. We managed to book our onward bus ticket at the place we were staying but the only dolphin trips they offered were combined with sticky rice demonstrations and a Buddhist temple, neither of which we wanted to see.
We knew you could get a tuk up to Kampi, where the boats go from, for about $12 so we just wandered down to the main town and grabbed one there.
On the journey up to the boat you pass lots of wooden houses and businesses on stilts, some beautiful and intricate and others a little ramshackle, most had a few cows or chickens living in the ground floor sections then family space was up higher. 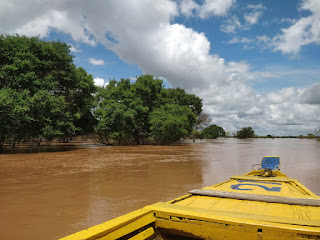 The river dolphin cruises only cost $9 each and they just take people as they turn up rather than waiting to fill boats, this can work in your favour as it meant we had a huge boat to ourselves, but this also mean there are more boats out on the river.
As this is the wet season the river was running fast and lots of the smaller islands you see on google maps are currently under water, so we had to travel about 20mins towards the other side of the river before we slowed down and started looking for the Dolphins.
It wasn’t long before we could see them coming up and taking breathes before heading back into the muddy water to hunt for food. It’s impossible to keep count as you only catch a glimpse of them as they breath but I think we saw about 8, although it could have been the same 2 swimming in circles. I believe they are critically endangered here in Cambodia, so I felt quite privileged to have seen them and it was amazingly peaceful out in the middle of the river.

We spent the afternoon lounging around back at our hotel mentally preparing ourselves for going overland into Laos the next day. After reading quite a few blogs I wasn’t looking forward to it but realistically how bad could it be??