We had booked another Mekong Express bus to take us from Battambang to Phonm Penh, departing at 07:30. As the office was just around the corner, we left in time to grab a takeaway coffee on route and then found a little shop next to the office that was selling various pastries. The woman spoke no English, so when we pointed at a few different ones, the only thing we could make out was ‘coconut’, so we grabbed a few each and a plain baguette and handed over the $1 she asked for.
This time we were in a minivan for the 5-hour journey, which I had pre-booked online, so we could get a front seat for Sadie.

The journey took 6 hours in total, as we had a 30-minute stop half way, the minivan was comfortable enough and the driver was decent enough, so overall the journey wasn’t bad at all.
When we arrived at PP, the vehicle hadn’t even stopped and about 10-15 Tuk Tuk drivers swarmed the doors. We could hardly get out the doors, they were all jostling for business and once we managed to get our rucksacks out the back, one had attached himself to Sadie. On asking him the price to take us to the hotel, about 2km away he immediately quoted $4. I’d already checked, and Grab was operational in PP, and the cost would have been $2 with them. He had a grumble about fuel costs and using local drivers but accepted the fare for S2 and off we went. Over the few days here, we discovered that $2 is a standard fare and gets you most places you want to go within the main tourist parts of the city.

We were staying in the Prantara Heritage Suites, which was in a central location and right next to the Royal Palace. In fact, as we later discovered, the British Ambassador’s residence was right next door to us, though despite our wandering past a few times (including once when lots of smartly dressed people were outside waiting to go in for a dinner), we never got invited in! 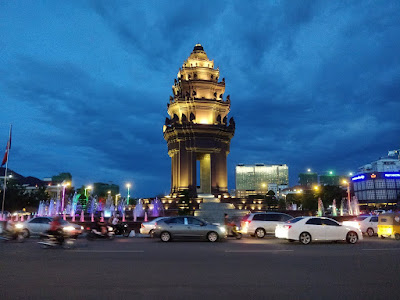 After moving room, due to the balcony we had being inside surrounded by glass like a greenhouse with no door separating the rooms, we chilled out for a bit and then decided to go up to what was meant to be one of the main tourist areas in town for drinks/food called St282. But once we got there after walking 20 minutes past the Independence Monument, we were less than impressed with the few streets we walked round. Everywhere was quiet, most bars were expensive and looked shit, so after a quick couple of beers, we got a Tuk Tuk down to another popular area, St172.
The first bar we went to was just a dive bar full of the stench of weed, the few surrounding that were ‘lady-bars’ with flashy neon signs, and the one we eventually stopped at was just old expats with young ladies! We had a couple of drinks in there, at least they were cheap, but our first impressions of this city were not good.
To top the first night off, we went to what was a recommended restaurant on TripAdvisor for dinner. I had ordered Pork Belly and it said it came with a salad, and Sadie had ordered a Chicken Burger, hoping it would come with fries or even some potato chips as in the pictures online. What arrived for me was a few cold bits of pork mixed in a salad which was mostly greens. Sadie got her burger, which was nice, but it came with a slice of watermelon and nothing else! So, we cut our losses and headed back to the hotel. 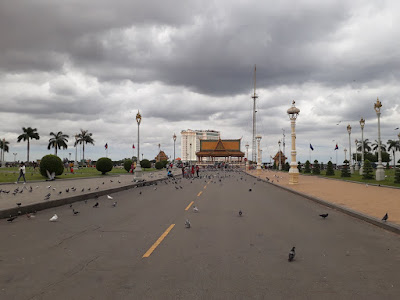 We gave ourselves 3 full days in Phnom Penh, and were already thinking that was probably too long, however we had set aside one full day to explore the city, another to do S21/Killing Fields and one to catch up on research, laundry etc. With not having breakfast booked with this hotel, we went out the next morning to find some food before exploring. Most of the decent places we found near our hotel were either very expensive, vegan/vegetarian/healthy or a mixture of both!
Enso was a bit of both, with a business type crowd in there with laptops, with varied menu with mostly healthy options but you could have some bacon etc if you wanted. Sadie ordered pancakes with bacon and maple syrup whilst ordered French toast. Both were delicious, massive plates and we washed them down with some lovely iced coffees. 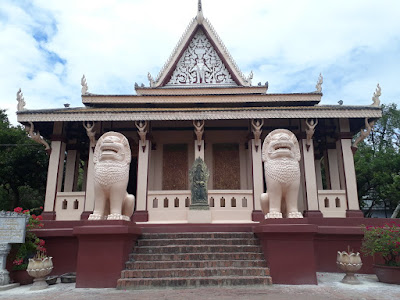 We then got a Tuk Tuk the few kilometres to Wat Phnom which is a 14c Buddhist Temple at the top of a small hill. After that, we walked along the riverside and then went to Wat Ounalom which is another temple complex from the 14c. Planned to go to the Royal Palace, but discovered it shuts for a few hours around lunchtime, so we just headed back to the hotel and planned to go another time.
I’d found an Indonesian place called Warung Bali nearby, and since we both loved the food in Indonesia and craved some, we decided to go there for dinner after having a few drinks down the riverside where had discovered the $0.50 beers are available. The food was amazing, and we had Chicken Satay and Nasi Ayam Goreng, both favourites of ours whilst in Indonesia. 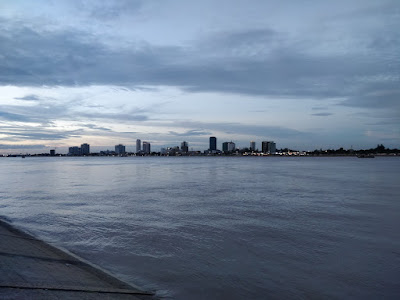 On our second day in PP, we had decided to do the S21/Killing Fields trip in the same day, the best way to do this is to just hire a Tuk Tuk driver for the day who would take you to them both and wait for you as long as needed. We didn’t pre-book anything, and after yet another amazing breakfast at the nearby Artillery Café where I had an amazing Tofu Burrito and Sadie had amazing pancakes with fruits, we found a driver called Pol(sp?) who would do this trip for us for $20.
So, we headed off around 10am and first stop we decided would be S-21, or Tuol Sleng Genocide Museum is its full name, and one of an estimated 158 over Cambodia. It is a former school that was taken over by the Khmer Rouge in 1976 and turned into a prison and interrogation centre. I won’t go too much into the history of the place, but the whole place has a sense of sadness and it is eerie walking round. 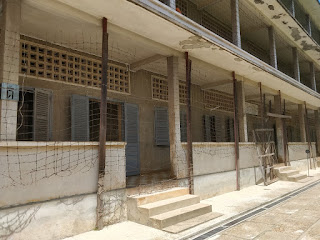 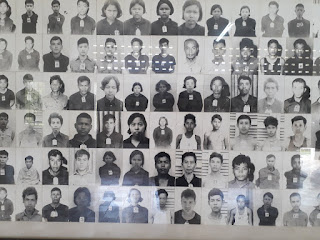 Previous friends who have been recommended doing the self-guided audio tour, so we took that advise and it has approx. 30 clips which you start at certain points on the tour.
I’ll be totally honest and say that this was one of the hardest places I have been too and obviously given the history of the place, the audio descriptions, the harrowing images, leftover equipment and just the sense and smell of walking round the place was very upsetting. We spent around 2-hours wandering round taking it all in, you go inside the 4 main buildings that once were classrooms full of innocent children, which turned into the place of one of the most horrific crimes of the century. Here is where men, women and children were detained and tortured by the Khmer Rouge, before being taken to their execution.
There are no words I can really find to describe it, however if you get the chance to go, then please do. 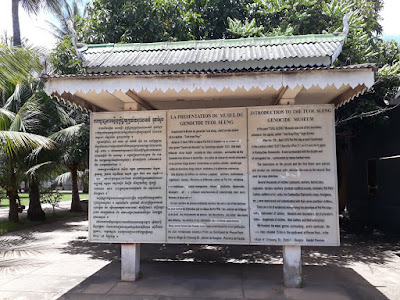 After that we went on the 40-minute journey through the suburbs of PP and to the outskirts of the city, to the area known officially as the village of Choeung Ek, one of the vast number of Killing Fields sites across the country that have an estimated 1.7 million bodies between them, approx. 25% of the country’s population at the time. This is where the people were taken too after being held prisoner, made to sign confessions, and ultimately signing their own death warrants.
This is probably the most famous of them all, which now has a permanent memorial dedicated to all those who lost their lives here, and houses over 5000 skulls of some of the bodies exhumed from the mass graves that cover the site. 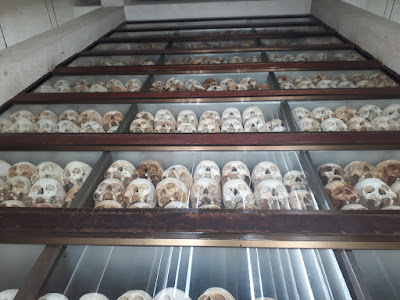 Again, we took the audio guided tour which was included in the cost at this site and gives quite graphic details whilst you wander round. Still to this day, bones and rags of cloth belonging to the victim’s surface usually during wet season, which was when we visited. Seeing those scattered around was heart-breaking, along with the graves and especially a tree which was used to batter children to death, before they were thrown to their demise. 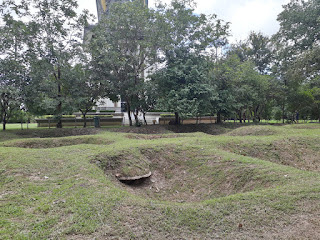 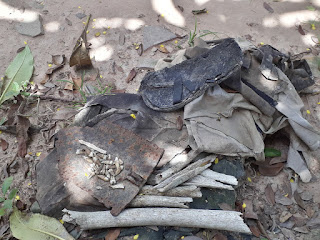 We spent another couple of hours here, taking it all in and then we headed back to the hotel as the heat of the day was ferocious. Arriving back at the hotel about 3pm, we had a torrential downpour of rain which eventually went off around 8pm, so took that opportunity to go out for some amazing momos which we hadn’t had since Nepal, followed by a delicious Indian meal. 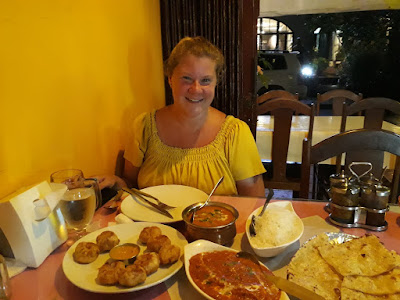 Our last day in PP was a relaxing one after the day we had previously took it out of us, started with breakfast at the first place we went too, then went shopping for a few bits and then back to the hotel to sort through hundreds of photos from the previous week. Sadie took a trip to see the Royal Palace, but sadly couldn’t get in as the King was in residence and there was police and security everywhere. Apparently, there was some huge parliament meeting the past couple of days, as our Tuk Tuk driver Pol explained to us, it was evident something big was going on by the amount of armed police and security all over the city. We have an overnight stop back in PP the following week, so hopefully we can get into the palace next time. 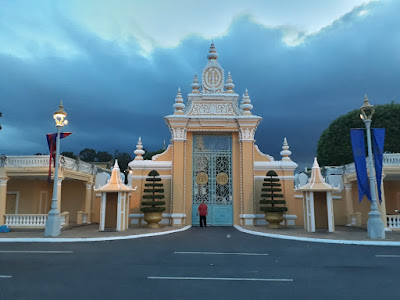 Our evening was a quiet affair, had some local food and then packed for another early bus to take us to our next destination via a ferry.