By Sadie - October 13, 2018
This bit of the journey had been primarily planned around being in a major town for Glastonbury Ticket day and Jane only having a few more days with us but I’d also heard from various sources that Chiang Rai was a nice less touristy town to stay in. In actual fact we were a bit disappointed on first impressions of the town, the beer was expensive, the food mainly western and things in the main town seemed a bit grotty.

They did have a good market and the most sparkly clock tower I've ever seen and our hotel was not disappointing as the rooms were big, clean, had A/C and the 2 girls that ran the hotel were amazingly helpful.
This was most evident when the morning after we arrived both Jane and myself appeared asking about internet or gamer cafes where we could use the internet on a desktop. They didn’t know of any off the top of their heads but after Jane explained what it was for and how much it was like a mega important competition that we needed to win they quickly started phoning people and looking things up on their phone. 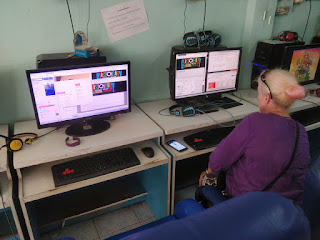 About 20 mins later they had arranged for a tuk tuk to take us somewhere suitable. Leaving Paul with the laptop at the hotel we were driven round some back streets until we came to a gamer cafe about 10 mins out of town. It was the perfect set up but neither Jane nor I got a sniff of a booking page and although Janes group was lucky to get tickets from someone in the UK, Paul and I were not.
All 3 of us were feeling pretty low for the next day or so, so we investigated doing something special to take our minds off it.

We’d been told about an Elephant Sanctuary nearby that was run like a safari in that you don’t touch, ride or pet the elephants there but simply watch them from a respectful distance. It sounded perfect and as a half day tour was just over £30 including pickup & drop off we booked this from their office on the main street.
Elephant Valleys or EVT as some blogs etc refer to them have been in Chiang Rai for about 3 years, they also have a sister site in Cambodia that has been going for considerably longer.
Jack, the manager, was originally from the UK but 16 years ago his 2-week backpack holiday turned into hard work building and maintaining Elephant Sanctuaries and his vision and dreams just keep growing.
It was Jack who picked us up from the hotel and after filling the van with 6 other people we hurtled off to his place just outside of town near the White Temple, he then spent 20 mins or so filling us in on the site, the 6 elephants that he had there and what he hoped to achieve with them in the next 10 years. It all sounded very exciting and I’d love to come back to see how he and the elephants are getting along. The elephants here have all come from logging or circus backgrounds and so have a few mental or physical quirks which need to be gradually addressed before they can live human free either in the wild or in a safe large sanctuary. 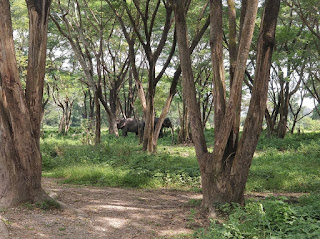 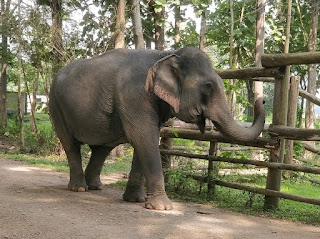 The way they operate here is there is one large enclosure that the 6 elephants have free range of and you walk round the pathways accompanied with an elephant guide. There are also at least 3 mahouts out with the elephants and at the moment the big male is being ridden as he’s been acting aggressively with the females, you never get closer than about 20 metres but get to watch them eating bamboo, interacting with each other, stripping bark and learning how to be normal elephants again. 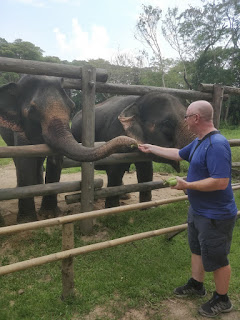 After a couple of hours mooching around we returned to the main buildings to feed all the females some bananas and banana tree sections. They take them from you so gently with their trunks as they peer at you from under their long eyelashes, it was simply magical. We were then treated to a huge lunch of veg dishes, spicy chicken, tofu and sticky rice before the lift back to the hotel. The food was amazing at the time but sadly it didn’t agree with us as we were both hotel room confined that afternoon and evening.

With Paul fighting a cold and needing to do some work on the computer, Jane and I escaped one morning and got the local bus up to the White Temple. The temple was designed and constructed by local artist Chalermchai Kositpipat and looks more like an art exhibit than a traditional temple but there is no denying it’s beautiful and very impressive even if it is slightly mental having a Buddhist temple with Jack Sparrow, Pokemon and Neo images on its walls. You aren’t allowed to take pictures of the inside of the temple or his adjacent gallery, but all his art is incredible. 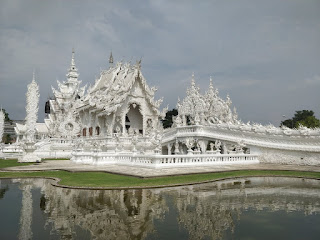 After the white temple we decided to continue our art installation day and go to the Black House. This is part studio part museum of the artist Thawan Duchanee and to say it’s a bit weird is an understatement. The grounds have about 40 buildings that are crammed full of animal skins, carved wooden furniture, antler / buffalo horn chairs and some very rude utensils. The aesthetic is like the series Hannibal crossed with a tribal version of Eurotrash, which sounds great but 40 buildings full of the stuff is a bit much even for me.

And so, our time with Jane was nearing an end. It had been a perfect couple of weeks and I think we both appreciated having another person to chat to and laugh with. 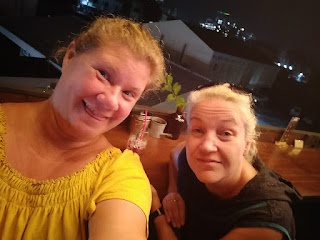 The following day Jane would start her flights back to the UK and we were getting a VIP bus to Chiang Mai, so we decided to go and have a posh final meal at a bistro café on the riverside. It was a fitting finale with the standard level of confusion, incorrect orders, delicious food and laughs.