We got a Grab from our hotel to the bus terminal which is as usual on the outskirts of the city. Then got our tickets printed off as we had booked online for the transport to and from Pai, as this way you can pre-book what seats you want for the 3-hour journey. This route is prone to people suffering from travel sickness due to the 762 bends between CM and Pai, whilst it passes through some amazing scenery to look at if you’re not throwing up into a plastic bag.

Obviously, we had booked the front seat and the one behind the driver for both legs, and thankfully we had no issues with either journey about getting these seats this time.
Our driver for the day was a young lad, and with a full minivan of tourists and locals, we headed off 10 minutes early. We had both taken travel sickness tablets before we set off, and these ones Sadie has make you pretty drowsy, so much so that even I had a short sleep near the start of the journey.
But it wasn’t long before we hit the start of the bendy road, and the constant swerving round the corners fast with this driver made sure I didn’t fall asleep again. He seemed to be in a hurry, as one traveller asked if we were having a toilet stop (as we are meant to) he just said no, before then stopping 5 minutes later at the side of the road so only the guys could go.
Luckily a short while later, we got pulled over at a checkpoint and a woman took her chance to run off to the nearby toilet, too much disgust of the driver who then tried to tell the guys who got off for a cigarette that they couldn’t!
We were soon on our way again though, and he had driven that fast without a rest break that we arrived in the sleepy mountain town of Pai around 30 minutes early! 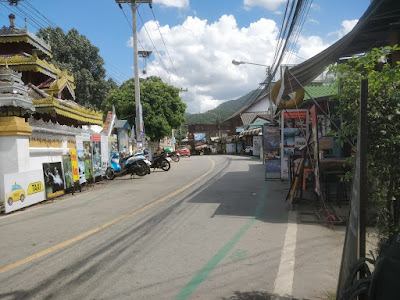 After stopping off for lunch, we headed by foot to the hotel we had booked for our 3 nights here, which was just over the other side of the river, about 15 minutes-walk away. What we hadn’t realised when booking this place was that A – it was up a huge hill to get to it and B – we had only stupidly booked a fan room as we were (wrongly) told it was cold in Pai by one of the Power Bar girls!
We both agreed we would see how it went for the first night, and then we had a little nap, only to awake in a pool of sweat. Sadie went off to speak to the owner about an upgrade, who wasn’t even around so got his brother, who wanted to charge a stupid 400 baht extra per night for an air-con room. After trying to negotiate with the owner of the place on the phone, he refused to budge on the price, so we investigated seeing if we could cancel (as we had pre-paid) with Expedia and found we could by paying the first night only. Deciding to cut our losses, we searched for somewhere nearer the town and with air-con and found somewhere suitable at around the same cost. We took a walk down to see it first, and it was right next to the town just on the other side of the bridge leading to the main street and was a small bungalow facing the river. 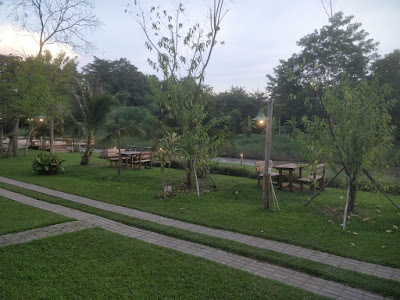 Oh! The bridge is made of bamboo and was pretty unsteady at the start of our time here, though they did make repairs to it as the days went by… am sure that’s a pretty regular thing! 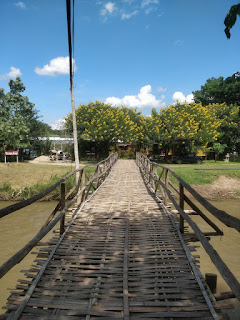 Agreeing with our new hosts to come right down but booking it online as it was cheaper then walk in rate, we went back to collect our stuff and tell the miserable guy there we were off!

Pai is a lovely little town, and getting more popular for backpackers and tourists, with one main street and a few running off it just full of guesthouses, bars and tour operators. It had small narrow streets and reminded us both of Ubud on Bali with its quirky little shops, yoga lessons and healthy shops! It also has some amazing hilly countryside all around it, and our plan for the 2 days we have here was to hire scooters to try see as much as possible. 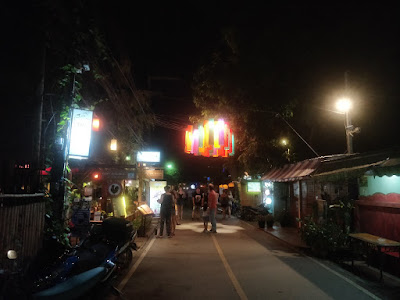 Every night the main street turns into a night market with lots of goods and food stalls, and I must admit the smells walking along it, with the choice and quality of food available makes it one of my favourite night markets so far. After having a couple of drinks, we decided we wanted to try a local Thai restaurant that evening, so went to a place called Pen’s Kitchen and we were not disappointed.
Then after another couple of beers, we found a place on a corner of one of the side streets called Pool Bar, which on first seeing it I thought it had a pool table, but in fact had a decent size swimming pool in it. As we didn’t come prepared for that, we had a couple of gin & tonics while laughing at the few people who were messing about in the pool. The place was quiet as was early on, but the few there seemed to be having a good time. We had a bit of a laugh and a quick chat with a couple of them, then headed for a walk around the town. 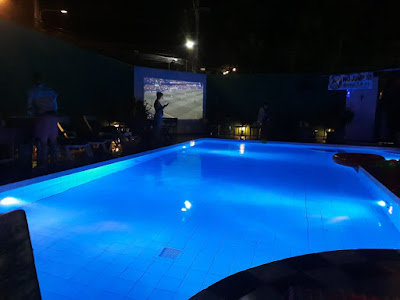 Later we stopped at a bar called Almost Famous for a couple of drinks, and a girl who we briefly spoke to earlier at the Pool Bar recognised us and sat down for a drink. She was called Courtney and was from Bournemouth and had not long started her year long travel adventure, so we chatted about what we had done and what her plans were. There was strange guy with her from Alaska, but she wasn’t even sure who he was (apparently a couple of guys from the bar earlier told him to look after her!).
We went to a couple of bars after that, till we all had enough to drink, and we made sure she got home safe to her hotel.

We had a rather disappointing breakfast from our hotel and decided on what we wanted to see around the area. On planning it, we could do it all over an afternoon and a morning, so decided to hire the bikes in the afternoon for 24 hours, and then go out then plus in the morning too. 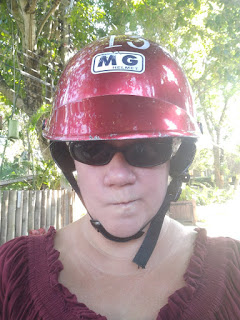 We got a couple of scooters for 100 baht each (£2.50) and off we went to first see what is described locally as the ‘Land Crack’. Basically, it’s a split in the ground that’s been caused by a couple of earthquakes from 2008-2011 and now the land owners have made a bit of a tourist attraction out of it. It wasn’t that impressive, but it was nice to see and after giving them a 20B donation, they kindly gave us some lovely fresh Roselle juice, which was delicious. 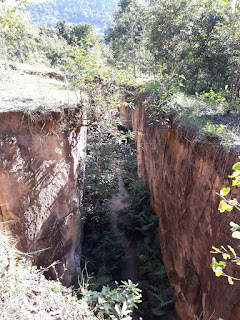 Next up was down to see a WWII Memorial Bridge, which was apparently built by the Japanese rule using locals forced to make it. It was a standard iron bridge you could walk across next to the newer main road concrete bridge. Sadie gave up half way across as it was way too hot, so I continued across to the other side, hoping to see a bit more information on it.
As I read the info boards on the other side, I discovered that the original bridge was destroyed by the retreating Japanese army in 1945 and this one was a replacement built 30 years later… I felt a bit cheated! 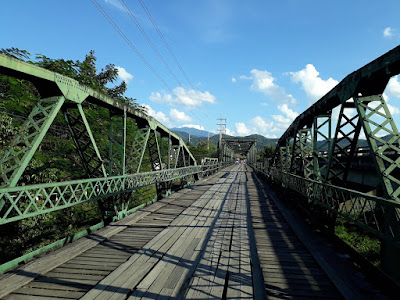 We then went to the Pai Canyon, which is a popular spot to watch the sunset. It’s got amazing views of the surrounding countryside; however, we didn’t venture down many of the trails as you need to walk along narrow ledges and I didn’t trust myself (or Sadie who slipped once anyway). We waited till the sun dropped behind the mountains, and then headed back the 15km to town. 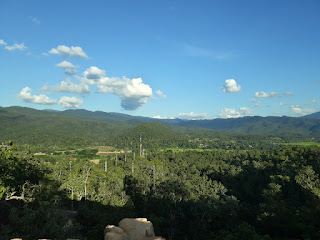 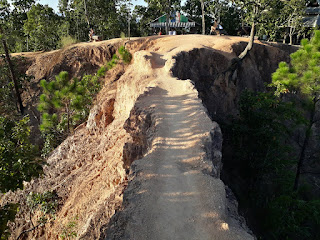 At night we walked the market again, up and down several times whilst grazing on street food and drinking cheaper beers from the 7-Eleven, Sadie got a couple more presents and we had an early night due to us having the scooters for the following morning.

We got up early and had a decent bacon and sausage bap from a place called Bigs Little Café and then went up to collect our scooters for the 50km trip north to Lod Cave. The run up there was beautiful, with lush green hills as far as you could see and an amazing winding road to negotiate that our little 110cc scooters sometimes struggled on. We had one stop at a viewpoint that gave beautiful views over both sides of the valley, simply stunning. 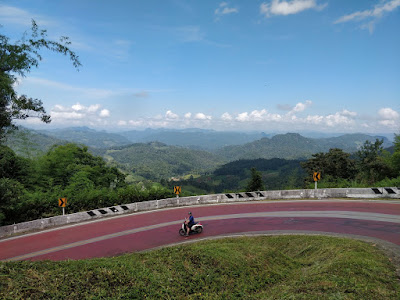 We then carried on down the other side of the valley and after about 2 hours of leaving Pai, we arrived at our destination. Sadly, due to the time of year, we could only visit one of the three caves here, and we paid our 210B for our guide and the bamboo boat you need to access the cave system. Our guide was a little old Thai woman, who had poor English but smiled a lot and carried an old paraffin lamp that you used to see down the pits. Apparently, we need a guide to enter these caves anyway so off we went on the short walk down to the entrance.
At the entrance, all these fish are swimming against the current of the river that runs underneath the system, and of course we had bought a bag of fish food for them, which makes amusing viewing as they all swim and jump to get as much of it as possible in their big mouths!


We go into the cave, onto the flimsiest bamboo raft ever and then go across the water to where we get off again and walk around the cave. Our guide points out all the interesting (and uninteresting) things and the caves are impressive with huge stalactites and stalagmites. After around 20 minutes we head back out, on the raft again and back out the caves. It was decent enough, the drive up there made it worthwhile though, and we got to see it all again as we made our way back to Pai, arriving around 2pm, just in time to get the scooters dropped off. 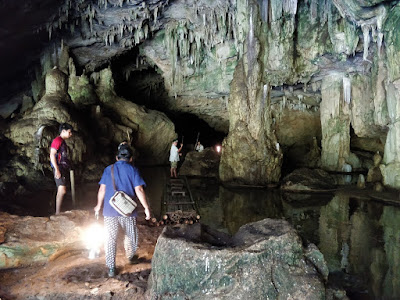 At night it was yet another quiet night (I think we need a rest from the boozing) as we had an early minivan to catch, and we just took a walk about, had some delicious Thai food, briefly met Courtney again to say goodbye and give some Golden Virginia tobacco too and then it was off back to our hut to pack.

The next morning, we did the 762 bends in reverse, this time with a careful driver who did stop for a rest break. As we had to do an overnight stop again in Chiang Mai, due to an early train south the following day, we had booked a hotel near the train station on the outskirts of the city. However, with nothing around this part of town and us both needing a quiet time, we just ate at the hotel restaurant then investigated Bangkok a bit more for next week.