Our train left Chiang Mai early morning and we settled in to our seats for the 6 hr journey to Phitsanulok. We were heading to Sukhothai really but as there is no train station there it was going to be a bit of a hotchpotch of travel methods before we finally got to our the hotel.
After 2 tuk-tuk rides and a minivan we arrived at the Blue House hostel, which is just off the main road in the new town of Sukhothai, where we had a private a/c room booked.
The town is very small, but they manage to squeeze in a few bars, a night market and a couple of restaurants along the busy road. 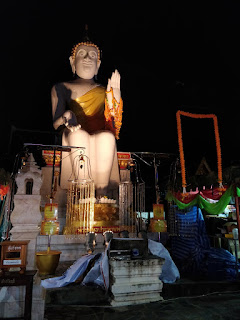 Part of the night market is held in the Buddhist temple and is set up more like a fun fair, with half the walkway filled with spinning, flashing buddha statues, monks offering blessings and a pulley system carrying flower garlands up to be draped over a giant Buddha statue.
They also had a big wheel for the kids, a stage show, an outdoor cinema screen and your normal clothes, bags and sunglasses stalls.
The food stalls are all along the road edge and after passing one insect laden table we got offered a couple of the small fried grubs by the man that ran it. Not wanting to be a rude ‘farang’ we both took one and tried it, we decided that they weren’t that bad at all but I’m not sure I’d want a whole bag full!

Sukhothai used to be the old Capital and due to the ruins in the old city it has been declared a UNESCO historical park. The old bit is about 10km away from the new town but the Songthaews go roughly every half hour along the main road and we were lucky enough to have one waiting there when we walked up the following morning. It costs 30b each and you could be packed in with locals and produce or have it all to yourself as anyone can flag this down and hop on / hop off.

He kicked us out at the entrance to the park and gestured to the bike rental shop opposite before driving off. The park is split into 3 payable areas and whilst the North and West areas are on normal roads the central and main bit of the park is only open to push bikes and people on foot. Now I’d not been on a bike for years but at only 30b for the entire day (under a £1) it was silly not to give it a go and it seems the saying is true - you never forget how to ride a bike.

Having paid our 100b entrance fee for the central area we wobbled off down the leafy paved road into a beautifully maintained park with lakes, clipped lawns and large ruins dotted about. Riding the bike was definitely the easy way to get around, although we did also spot a hop on/ hop off electric tram and a few electric tuk-tuks going about. 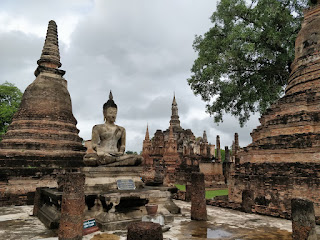 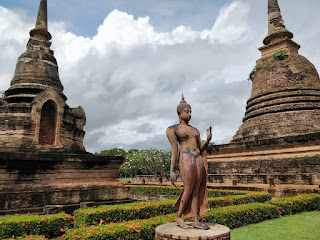 We spent a very pleasant morning riding around the Central and West ruins before deciding it was too hot to continue and our bums needed a break, so we headed back to the hostel to chill out.

The hostel had arranged for us to get the 8am bus to Bangkok so it was another early start but this time in a big double decker A/C coach. We had the seats downstairs which meant we didn’t get as much of a view but with no-one behind us we could recline our seats and nap the whole way there.

The whole journey took about 7.5 hrs and we then had to get from the huge bus depot to our hotel over near Khao San Road, which was done on the local bus number 3.
Our hotel for the next couple of nights was the New Siam Palace Ville and as places to stay in Bangkok aren’t cheap this place was slightly over budget but had a central location, pool and comfy rooms. As we only had 2 nights / 1 full day staying in this central area we planned to get up early and cross off as many of the temples, attractions we could before the heat got too much.

Obviously the first thing we needed to do was check out in the infamous Khao San Road night life and as everything is more expensive in the city this ‘backpacker’ street was no exception.
I honestly don’t understand why everywhere we have gone that has a backpacker scene is so expensive, you’d expect it to be cheaper but it was the same in nearly every country we’ve been too. 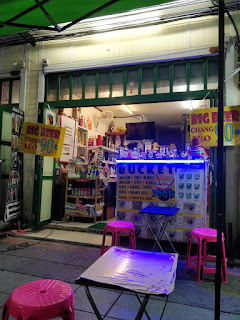 We ended up sitting on plastic stools outside a little shop because her beer was the cheapest on the street. We did find cheaper places to have a drink, but these were mostly on Rambuttri Alley and the connecting small streets rather than Khao San itself.

The next day we didn’t get out quite as early as we’d promised ourselves, but we were still out by 10am and finding our way around the nearby attractions starting with the Grand Palace and the Emerald Buddha. 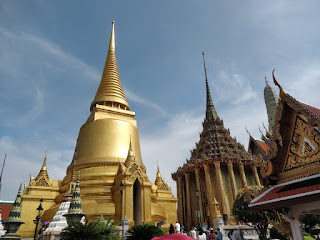 We then worked our way round to Wat Pho and the reclining Buddha, Wat Arun across the river, the giant red swing and many many beautiful buildings and temples in-between.  All the sites were stunning and the detail on the stupas was beautiful but you are doing all the attractions with coach loads of other tourists so it can get very busy.
With the threat of a thunder storm and me getting a bit ‘templed’ out we headed back for an afternoon by the pool and as today was the end of Buddhist Vassa, and no bars were allowed to sell alcohol we had a quiet night.

The following day we were up and out of the hotel by 7:15 and in a grab taxi to Thonburi station. Here you get the local train up to Kanchanaburi, which is where the Bridge on the river Kwai is located and the Death railway museum with associated cemetery.

We were staying at a place called Good Time Resort which was next to the river and had been recommended to us by Pauls friend. It was a lovely little place set in manicured gardens with a fish lake, pool, riverside restaurant and clean A/C rooms.
A short distance away on the main road through town is a collection of bars and restaurants, most of which seem to be ex-pat or go-go girl bars judging by the pictures and names. 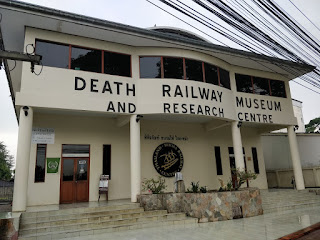 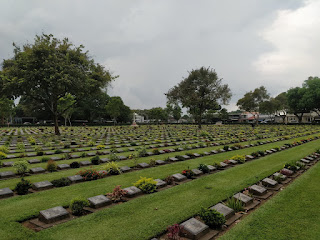 We decided to do the Hellfire Pass the next day as it’s about an hour away on the bus, so we took a walk down to the Death Museum and walked around the war cemetery there.
It seems to be a huge day trip tourist attraction and we saw coach loads of kids and people being dropped off for their allotted gawp time at the graves and museum before being hustled back on their coaches.

The following day it was clear blue sky and hot by 8am but as we only had the 1 day to get everything done in, we headed out to stand at the side of the road and wait for the 8203 bus.
There was some dispute on how often these ran on the internet some said every hour, and some said every half hour. I think the truth of it is they run as they like, as we stood in the baking sun for around 45mins before it eventually came past but later they were running much more frequently. 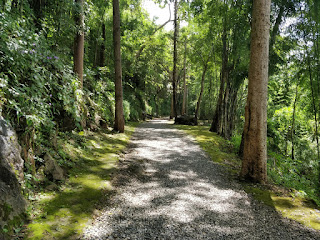 Unfortunately, the visitor centre at Hellfire pass is closed for refurbishment at the moment but they still have a manned office where you can get an audio guide before heading off down to the site of the old railway.
There isn’t much left of this part of the railway but with the help of the audio guide and the few sleepers, iron pegs, drill marks etc it paints quite a vivid picture of what happened here. It’s also very beautiful and the views over the valley are stunning.
Due to time getting the better of us we didn’t get to walk along as much of the old track as we’d have liked so after a couple of hours we headed back to the road to await the bus back to Nam Toc.

At Nam Toc the train line is still part of the original Death Railway and we planned to ride it down to the Bridge on the River Kwai, have a wander about and then walk back to the hotel along the road. The train goes past amazing scenery, over the Wampo Viaduct and then winds its way over the river on the very famous bridge – even though it’s not the one that was used in the film. 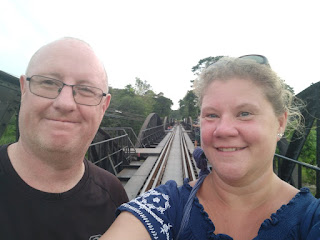 By the time we got to back to the hotel it was about 6:30pm and we grabbed a quick swim in the pool then headed out for dinner.
Our train back to Bangkok was leaving the following morning at 7:19am so another early start but this time I had planned a surprise luxury hotel for our return to the capital.