We had to get the early morning train at 07:19 back to Bangkok, as we had to make sure that we were back in Bangkok and checked into the hotel to get set up for the Glastonbury CV ticket sale at 4pm local time.

A short overloaded tuk-tuk with us 2 and another 2 girls with our 4 lots of luggage saw us dropped off at the train station, in time to buy our ticket and board the train.
Trundling through the countryside on a train with beautiful scenery is a lovely way to travel and before long we arrived back at Thonburi station around 3 hours later. Then it was a Grab to our hotel, which up until the driver confirmed the name of the place to Sadie, I didn’t know where she had booked as it was a surprise.

She had booked us into a place called Legacy Suites Hotel which is an upmarket hotel in a business district with a pool and leisure facilities. At check in, I found out Sadie had already asked by email about a free upgrade, and the receptionist confirmed she could do this. We then got taken up to our Premium Suite, sadly the first one smelt of smoke, but we quickly got taken to another one and got settled in. The room was huge, with a seating area, table/chairs, kitchen with full size fridge/freezer, microwave etc (not that we would use them!) 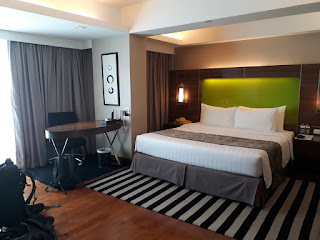 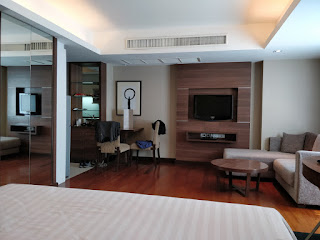 It was nice to have a little bit of luxury for the last 5 nights of our trip, and as the room was so comfortable, this probably didn’t help us as we stayed in our room more than we should have over the next 4 days… not such a bad thing though at the end of this trip! But given that every day it was so hot in the city, far too humid too for us to walk around all day in it, we were glad of our climate-controlled room!

After we had got unpacked, we headed out for a spot of lunch at a bakery then got some supplies from the supermarket... including a bottle of gin and some tonic!
Then it was back to the hotel to get set up for yet another Glastonbury ticket scramble, this time for CV passes. We still don’t have our actual tickets for the festival, so we needed to rely on a friend to use their details to buy one, and then we would transport her and her stuff in if we are successful come April.
Our ticket buying groups are well organised with spreadsheets etc, and with lots of us trying for the 12 passes we needed, we managed to get them all, in fact we were so efficient, some people ended up with duplicates which will all get sorted out eventually.
Oh well just need to hope we get festival tickets now, though am sure we will get there one way or another!

So, with those in the bag, we opened the bottle of gin and had drank about half the bottle, then it was time to jump on a bus and head back over to the Khao San Road area to meet up with Courtney who we had met in Pai. Already feeling a bit tipsy, we had expected this to be a messy night and we weren’t wrong.
Started off at a bar on Rambuttri Street where we met up and had a few beers while listening to a live band, people watching and catching up on our travel stories. We stupidly hadn’t had any dinner and before long we headed off to the next bar, where we had seen buckets of spirits/mixer for 90B, so we had a couple of them. After a short downpour, we then headed onto Khao San Road and found yet another bar doing cheap buckets and after drinking them, we were all quite drunk. 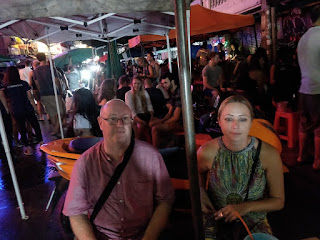 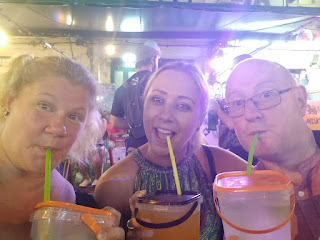 Am not sure who’s idea it was to go to a club, but before we knew it we were all heading to some club in a tuk tuk. It was called Shock39, in the middle of nowhere and I can’t quite remember much about being in there, apart from the girls were up dancing and we had a couple of drinks including  jaeger!
After that, we somehow ended up in another tuk tuk, not sure where it was even going (it was heading in our hotels direction) and we made another stop at some fancy hotel, mainly to use their toilet I think, though we might have asked the driver to take us somewhere nicer!
We then walked for a short while and apparently, I was going the wrong direction down a one-way street at one point, so Courtney got a taxi home and eventually me and Sadie got back to our hotel via 7-Eleven for some toasties at around 3am! 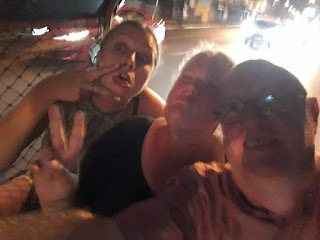 We managed to wake up in time for breakfast, along with the rest of the hotel at the same time it seemed on this Sunday morning, as it was a bit chaotic down there as there was no tables and people waiting everywhere. Eventually we got seated, shoved some food into us and then headed back up for more sleep. As it was a Sunday, we planned to go to the huge Chatuchak Market, but sadly we didn’t make it in time which am annoyed about, but we will go on the piss!
However, we did manage to crawl out of bed and head along the road from our hotel to a pub called The Royal Oak, which was a very busy English pub and who we had been checking out for a Sunday Roast. We were not disappointed as we both got our plates of food, piled high with lovely roast meat and all the trimmings… including Yorkshire puddings!
That was us for the day to be honest, not much else happened as after dinner we just headed back to the hotel to recover some more!

Next morning breakfast was much more enjoyable and relaxing, then a lazy morning in the room and then in the late afternoon we went on the Metro in towards the city. Firstly, we went to see the Golden Buddha Temple (last one of the trip!) and then took a walk through the narrow side streets around Chinatown, however we weren’t that impressed and soon jumped back on the metro to take us up to Talad Rot Fai Night Market. This is one of the larger night markets in Bangkok with a good selection of food stalls, goods and a few bars dotted around the place too. We spent a few hours here, eating some street food and having a couple of beers before heading back on the Metro to our hotel. 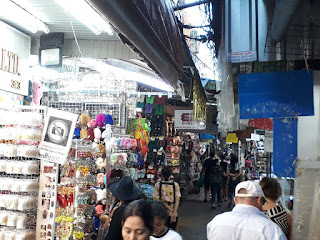 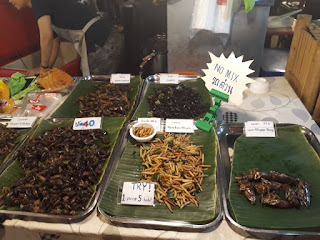 Morning again was spent in the hotel room, catching up on sorting photos out and writing the blog. In the afternoon we wanted to go on the Sky Train, so we got that from near our hotel and went into Ratchaprasong, wandered around a mall for a bit and then got one of the khlong boats back along the canal. Both are great methods of transport for moving about the city, along with the metro and certainly beats being stuck in traffic on the very busy main roads throughout the city.
As this was our last chance to have a big night out, before we headed out we finished off the rest of the beers and gin we had in the fridge, and then got a Grab over to Nanas.
This is one of the 3 main red-light districts in Bangkok, and probably the most ‘touristy’ out of them all. First, we stopped at a pub called Chequers, another English bar where we had a couple of pints of Westons Stowford Press Cider, expensive but nice for a change from the Chang beer.
Then we went into Nana Plaza, which is a 3 level ‘mall’ full of go-go bars and scantily clad girls trying to get you into them. We didn’t stay long here as we wanted to go get some food and head to Soi Cowboy, one of the other areas of similar vein.

After a quick pit stop for the toilet and a Big Mac at McDonalds, we walked the short distance to find ourselves at the end of the street, which is just wall to wall go-go bars, with even more scantily clad girls and a few ladyboys too.
Drinks were really expensive on this strip at around 180-200B for a beer (£4-5), but we saw one place called Lighthouse that was doing Jim Beam for 100B. Neither of us drink that as a rule, but we felt we needed to experience one of these bars here, so after Sadie went in ahead to check it out, we both went back in and took our seat near the stage. 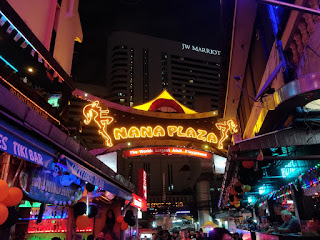 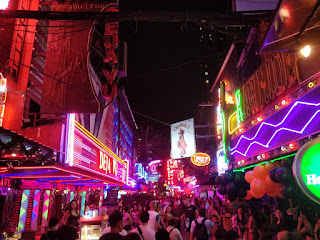 There were around 10-15 girls dancing on it, with varying degrees of clothes on (but not naked), this continued for a bit, then they would shuffle off mostly looking miserable and some more would come out in their place. This went on for a while and after a couple of drinks, we got bored of it and headed back out onto the street, pretty disappointed in our experience of the place.

After walking up and down the street to see if there was any other drink offers, we were about to call it a night and head back to the hotel, when Sadie went to look inside another busier looking bar called Lucky Star. She came back out quickly to tell me that “They are all naked in there”, so obviously we went in and took a seat haha!
We ordered a couple of their expensive beers and watched the show, but it was clear from the start that this one was far more professional and the girls were far more polished dancers, and actually used the poles very well too. The music was also far better, the girls seemed in better spirits and there was a better feeling in the bar overall.
As the evening went on the show continued with various stunts (I won’t go into any graphic detail here), but needless to say even I was a little shocked at some of it… Sadie even managed to blag a free Tequila slammer 😉.
Anyway after a couple of beers, we needed to get back to the hotel and obviously went via 7-Eleven again for yet more toasties.. to see if they would wipe our memory again!! 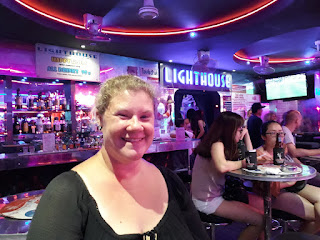 Our last day in Bangkok was a lazy affair again, with us sitting about in the hotel till mid-afternoon and then heading to a nearby mall to do some last-minute shopping… except we didn’t buy anything!
We wanted to spend our last night on a nice dinner, so we went to a place that was highly recommended called Sri Trat. It was a new Thai restaurant just round from our hotel, and not that cheap, but since it was our last night and we felt we had eaten a lot of junk here so far, we treated ourselves. The food was amazing, lovely atmosphere, good staff and for a 3-course meal each, 2 beers and 2 cocktails it was only £75, which you would pay more back home in some places.
Sadie had a durian based dessert, it was disgusting but she says she is glad she tried it before heading back to the UK. 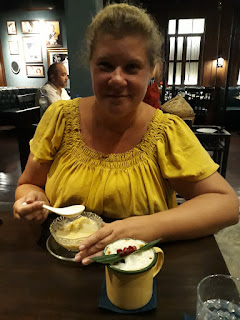 After that, it was back to the hotel to pack for the final time, and with an alarm set for 4am to get the taxi to the airport, it was an early night for us both.


Link to Back To Bangkok Photos