To Portugal and beyond


After a smooth crossing we started the French leg of our journey by heading to the city of Rouen. Everything was going so well until we watched in the mirror, as our fridge vent flew out of the side of the van and smashed into a million pieces on the road! We stopped to assess the damage and decided that there was nothing to do but press on to Rouen and see if we could patch up the hole in the van. A bit of cardboard, a plastic bag and some packing tape later we had bodged a makeshift cover and started frantically googling places to get a replacement. 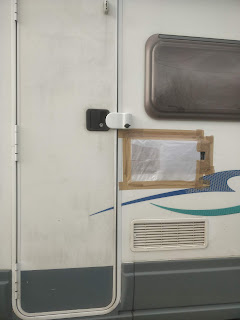 We stopped the night at free parking by the Maritime museum next to the River Seine, which was just a massive carpark near some major roads but it was relatively quiet and we were way more concerned with what our next plan was and how expensive it was going to be!
The next day we decided to continue on and either find stockists and fitters in Spain or worst case scenario get parts delivered to our hosts in Portugal. As we were doing the more scenic non-toll roads our next night stop was just outside the town of Tours in a free aire with all the facilities you would need for your van. They had a drive over water disposal, a clean toilet waste point, fresh filling water and free wifi, the only thing missing was a pretty view as it’s tucked behind some farms and houses just off a small road! It was such a prefect little spot one French van dweller was clearly using it as his permanent pitch point but as he was very helpful showing us where things were it was a blessing.


As we'd done all driving and not much else we decided to see if we could do some sightseeing in Bordeux the next day but a chance detour to find cheap diesel took us past a caravan repair place and we stopped to see if they could help with the fridge vent. A quick conflab with the owners daughter who spoke prefect English and they were on the phone to a local supply store that had the part and could fit it for us that day. Result! We thanked them and headed over to Narbonne Accessoires, which is a lot like a Go Outdoors caravan store, where they were waiting to fit our shiny new white vent and relieve us of 90 Euros! Having now lost the best part of the day and spent more money than we hoped to we skipped Bordeux and headed off to another free parking spot recommended by our park up app in the tiny village of Pissos in the middle of a nearby National Park. A quiet night in a large carpark behind the village church with 2 other motorhomes and a local bakery serving croissants and bread in the morning and we were feeling much better about our troublesome journey. 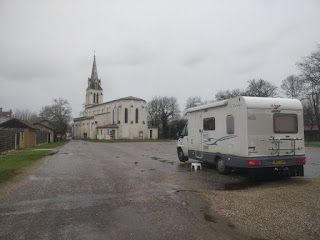 It was a straight run over the border into Spain the following day and the surrounding countryside was beginning to look much prettier with snow capped mountains in the distance and green national parks for us the drive through. We stopped at a picture prefect lakeside carpark for the night where the only sounds were the birds and some nearby cow bells. 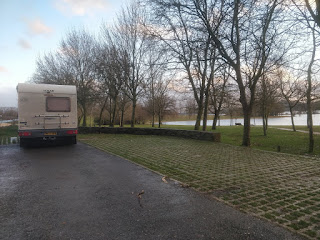 The pretty scenery doesn’t last long as it gets flatter as you travel across the centre of Spain towards the city of Salamanca. This time we’d timed it just right and had plenty of time to stop and wander about the beautiful city, we even found free parking in a church carpark 5 mins walk from the old city centre.
Our chosen night stopover wasn’t very glamous as it was just a petrol station forecourt but it had all the facilities you needed for emptying waste and refilling fresh water and it enabled us to refill everything before the last push into Portugal, we even found a laundrette round the corner to do all our washing.
We’d been warned by our hosts that fuel is much cheaper in Spain so after heading for the border we took a slight detour to find a petrol station, this meant we were a little bit behind schedule for getting to our hosts but the views over the mountains were stunning.


Our first hosts stay in a little Quinta just outside the tiny village Pedrogao. We had agreed to meet Noelia in the local café about 10mins from the site and after a few introductions and coffee we followed her 7 seater through town and off into the countryside. Gradually the track got more and more unmade, the trees got closer on all sides and the track got so narrow we feared we wouldn’t get through without major damage. Paul drove extremely well and soon we could see the tops of festival style marque tents and cleared land. Their land is a lovely mix of cleared grassy areas, Eucalyptus trees and overgrown scrub land, at one end it goes down to a river with a couple of old ruins next to it, at the other end they have made chicken and pig enclosures, a few veggie patches and there’s the communal kitchen / seating area which was a welcome retreat from sun, rain, cold and loneliness depending on the time of day. 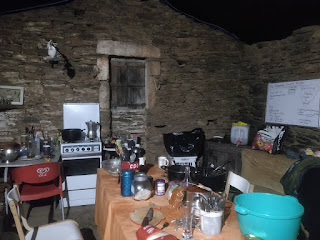 I could babble on for ages about how beautiful it was there and everything we did but it would just be boring to read….I mean more boring than it has up to now. Needless to say we quickly felt at home with Leif, Noelia and Lyanz and loved helping them alongside the other volunteers and guests Devo, Alin, Carolina and Yanna. 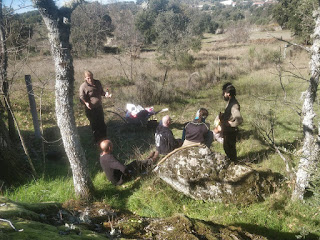 We partied with other escaped English people that have purchased land out here, ate amazing cheap tasty food in restaurants, were rendered speechless at the beauty and heat of the days and how quickly it turns to cold, clear star-lit nights.
I ate more veg and healthy food in the 3 weeks we were there than ever before thanks to the delicious meals knocked up twice a day and we danced round fires, drank cheap wine/beer, installed wood burners, learnt how to make fencing out of cleared trees, planted acorns, helped neighbours, caught pigs, walked needy goats and laughed often.
We learnt about community life and Leif shared his vast knowledge on everything from tipi building to carpentry skills and it was a fantastic first stop on our off grid Portugal adventure. 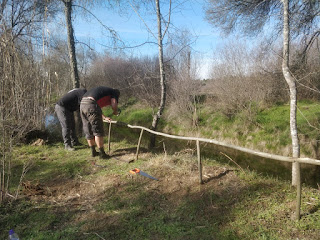 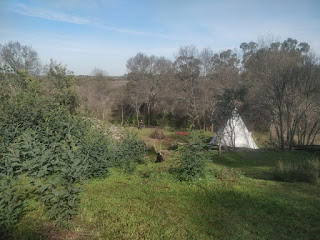 3 weeks went very quickly and we really didn’t want to leave but felt we should see more of Portugal than the first town we stopped in, plus we had promised a few more people that we would stop to help them in their little bits of paradise. So after spending a day clearing the track of overhanging trees and moved the rocks that threatened to gouge holes in our tanks we headed off towards Oliveira do Hospital where our new hosts Richard and Lisa were waiting.