Penamacor to Oliveria do Hospital

By Sadie - March 29, 2019
We took our time going the short distance across the base of the Estrela mountains as we wanted to see a bit of Portugal, so we stopped at a little campsite next to a river and a Y shaped bridge called Pont das Tres Entradas. The campsite is run by a Dutch family that speak perfect English, sell very cheap beer and have basic but clean facilities, but over here campsites are a bit like Easyjet, you add on everything at the till so it’s never quite as cheap as you first think it is! 2 people for 2 nights in a motorhome plus hook-up ended up being about £30 but it did mean we cleaned ourselves and the van from top to toe…..I even straightened my hair! 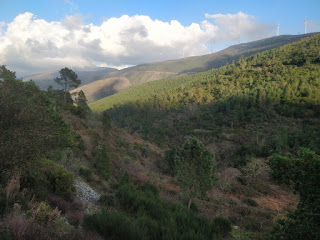 Our next hosts, Rich and Lisa, had agreed to meet us at the local football stadium in Lagares da Beira, as it wasn’t far from the end of their track and this meant they could guide us down to their land as apparently it gets a bit narrow. This track was extremely bumpy and Daisy ground and scrapped her way down the hill following their 4x4 until they stopped and said that up ahead was where it gets difficult! Once again Paul drove it superbly and with 3 people guiding him and trying to haul huge rocks out of the way we made it with only minor plastic scuffs. The boys had already earmarked the trouble spots for the route out and as Rich had a power chisel hammer in his arsenal those rocks weren’t going to stand a chance. 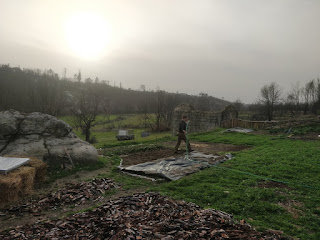 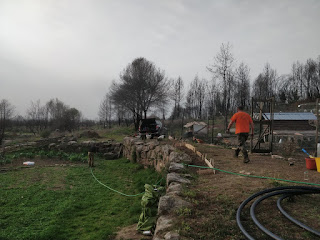 Lisa and Rich have a beautiful Quinta that has staggered terraces of flat land amid huge boulders and boundary walls and a river running along the bottom. Sadly, their land and much of central Portugal was burnt in the massive fires of 2017 so there aren’t many live big trees about but the dead trees are giving life to new saplings and seeing the woods and land recover will be amazing.


They had already built a huge enclosure for their chickens, knocked up a poly tunnel for seedlings, started an allotment level and built an outdoor kitchen for their caravan but with a deadline approaching for the dead trees to be cleared, a ruin they wanted to rebuild as a house and a list of other essential improvements needing doing it, it was no rest for the wicked. 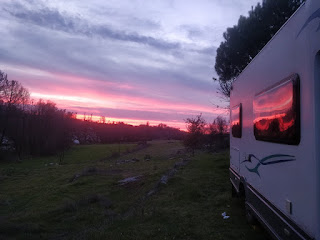 Again, I will not bore this blog with 2 weeks of land clearing, IBC moving, Pastel de nata munching, plumbing, trench digging, carnival dancing, pipe burying, sundowners, warming fires, weeding, chicken catching and delicious meals. We learnt loads from Lisa and Rich from animal butchery and bench building to propagation and cooking, we ate some fabulous food; including cockerel offal for breakfast, laughed often, cuddled their gorgeous dog Leia and 2 cute cats, created twig piles everywhere, fought bramble balls and pulled up many, many Broom roots. It was a really fun and full on couple of weeks and it was with a heavy heart that our final sunset on the land and ‘Paulo’ visit came around. A sad farewell to Rich, Lisa, Leia, Bobby, Rosie plus Droopy cock, Ninja, Brown pants and all the other chickens and then we were off towards the mountains. 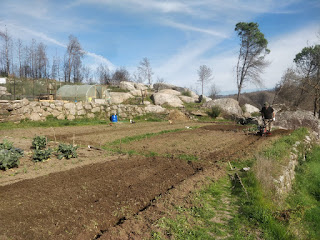 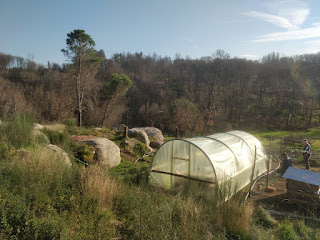 The next place was in a tiny hillside town called Cerdeira and there Nico and Patricia had a small place that needed help with land clearance. Their land was in a lovely little nook half way down a hill but sadly the road in was narrow and steep with no turning space for the return trip, so after much umming and ahhing we decided not to risk it. We spent the night in a lovely little park up in Barril de Alva, where they had all the normal waste facilities and you could pay 3.5 euros for electric hook up, which we did as the solar was playing up once again!


We really enjoyed being on the road again and as we had a week in hand before we had to be anywhere we decided to go off on an adventure. Without following a map or plan we headed off to explore and soon found glorious views, waterfalls, abandoned villages, haunted caves and scarily narrow unmade roads. The plan, as it was, started to come unstuck when we realised the solar issue was not fixing itself and we’d need to seek professional help. We found an English speaking guy that was located nearby at Monsanto and as this was on the must see list we headed that way. 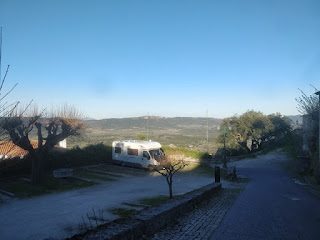 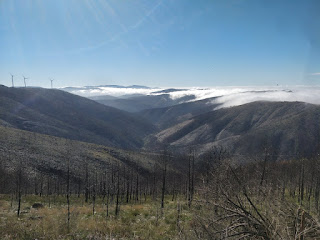 Monsanto is an historical village on top of a hill with castle ruins, narrow cobbled streets and houses seeming built into the rocks and bolders, it was a lovely place to chill out for awhile whilst we tested and chatted to Leo from Sparkpoint Solar. It ended up being a loose connector from the panel, probably caused by all the bumpy roads, so a relatively quick fix once Leo clambered onto the roof and soon we were back up to our normal charging levels and free to go off grid again. A few more nights spent up and around the Estrela mountains and natural reserves seeing clear skies, magical sunsets & sunrises and all too quickly our free time week had disappeared. 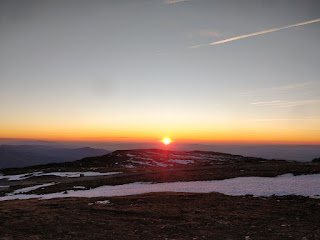 Our time in Portugal was soon to be nearing its end and the home ferry from Dieppe was booked but on route we had agreed to stop off for a week or so at our first hosts place, plus we really wanted to see if they had got onto Portugal TV!