Since the last blog that I posted at the end of the summer event season, we have embarked on our next adventure and have already spent a whole month in the gorgeous Penamacor region with our old friends Noelia, Lief and Lyanz plus met some new friends too... but hasn't been without its challenges as blogged below!!

Firstly though, we spent the weekend at the Something Else In The Dunny festival, which despite the appalling weather conditions (which ended up us totally flattening our leisure batteries, more on that later), we had an amazing time with lots of our favourite people in a field.. and was a lovely way to say goodbye to everyone for the winter months.

A couple of days later, we flew out of Gatwick to Nice, to spend a few days with Sadie's family in the lovely region of Grasse, where we ate so much good food and relaxed for a few days which was nice. We had left Daisy at a small residential street in a village on the main Brighton - London line, as it was a lot easier and cheaper to get from the train station to Gatwick than try and find airport parking. 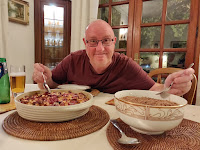 We were a bit worried about leaving her there, but on our return everything was fine and after getting back very late at night, we headed on the short journey to Newhaven as we were booked on the 10am ferry the next morning to Dieppe, yeah not a lot of turnaround time, but hey we are used to it.
What we did notice that night was that the leisure batteries didn't last as long as usual, and on thinking back, since the festival when they got flattened, we had hardly used Daisy and she was parked up under some trees, so not much charge would have been getting in from the solar or from running her.
Hopefully a couple of long drives the next day or 2 would help boost them, and after our first long drive in France, we stopped in Bonneval but the issue didnt look any better.

The next morning we decided to get a smart charger for the batteries (which we had discussed purchasing a while back in the UK), so headed off to a motoring store called Norauto which is similar to Halfords, and £100 lighter off we set with it, with plans to charge/re-condition the batteries when we got to Portugal.

We spent the next couple of days on the road, stopping again in Salamanca as it was beautiful the last time, and we wanted to go for Tapas.. and we weren't dissapointed and found a lovely place to eat. 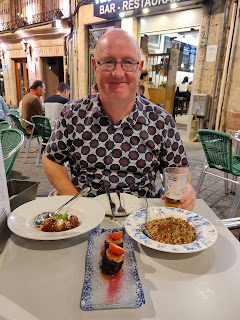 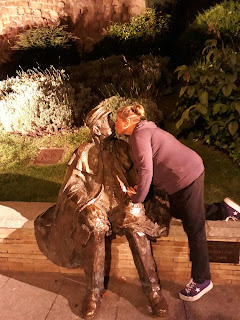 On arrival in Penamacor, we spent the first couple of nights in the town as we wanted to monitor the batteries, thankfully our lovely friends offered to charge them even though they actually seemed to be performing ok, it would be good to 're-condition' them with our new fancy charger.

Noelia & Lief are expecting their 2nd child in December, so for practical reasons they are renting a manor house on a large Quinta, and the plan was to help our on their own Quinta by parking Daisy there and we could feed the pigs and chickens plus keep an eye out on their land.

We took one of the batteries to their house, and put it on charge.... sadly a few hours later it seemed to power itself off and was never to power on again... great so we had a faulty unit we bought in France and were now in Portugal for 6 months... and to make matters worse we had not been given a receipt and only had the transaction showing on a bank statement as proof.
We did eventually get all this sorted thanks to Sadies persistence in emailing/calling them to get it sorted, and eventually we got sent a copy of the receipt, and authorization that we could exchange it in one of their Portugese branches, which the nearest was over 2 hours away. Noelia to the rescue again as they had a trip up there for an appointment, and the faulty charger was replaced and we got both batteries sorted! 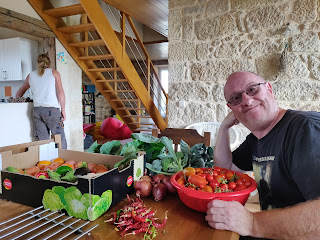 Our initial plan was to stay in the Penamacor area for a few weeks, then go explore a bit more of Portugal and do some more workaway type stuff, and during that time here we also wanted to source a bit of wood for our new worktop, and hopefully get Lief to help us fit it too.. but as is typical in Portugal and with our bad luck, plus things go a lot slower than expected hence why we are still around.

There was also one day when the cockerel and 6 hens were out the compound, and he went missing, sadly never to be seen again apart from a few feathers, so looks like a fox took him in broad daylight and not even that far from where Sadie was sitting with the pigs.

We then had another issue in Daisy, where our inverter developed a fault and had to borrow one to charge laptops etc, whilst we decided to get one shipped from the UK so it had a UK socket to match our needs. This took under a week to arrive, so was well impressed with the service from 12 Volt Planet.

Another day, another disaster where we borrowed a friends car to drive to Castelo Branco to go shopping, do laundry etc. I stopped at a roundabout as a car on it wasn't indicating what way he was going, and just as I was pulling away, a car banged right into the back of us. Thankfully we were both ok, our friends car had damage to the lights/bumper etc and the drivers car got the worst of it. Luckily his passenger spoke some English, and we arranged to meet at his dads garage a couple of hours later to swap insurance details and fill out the required forms, and he took responsibility which was a relief! 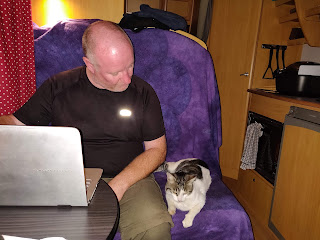 Then the next issue was whilst staying on the Quinta, a neighbours cat called Willow came to visit us a lot, and was always wanting attention. One night I let him in and no sooner than he was in, he jumped onto our table, where I had a small beer and yes indeed he knocked it over covering my laptops keyboard!
Despite wiping it straight up, and letting it dry out for a few days, numerous keys failed to work and would need repaired. It's a HP Spectre X360 laptop/tablet hybrid, and despite me having a quick look inside the cover, it would need a full strip down and probably a replacement part or two, so it would need to be an insurance repair.
It's covered worldwide for instances like this, but unfortunately they will only collect & return it to a UK address, so I have had to send it back last week to a friend in the UK, who will kindly send it off to the repair place and get it back to me once returned, so that could take another couple of weeks at least!

We did manage to see a few bits of land, sadly none suitable, one in particular we loved but access was very difficult for Daisy and would need a lot done to improve it.

We did manage to source a lovely bit of wood for the worktop (we had already bought the new sink & hob from the UK), which turned out to be Mahogany,  for 30 euros and couldn't wait to get to work on it. 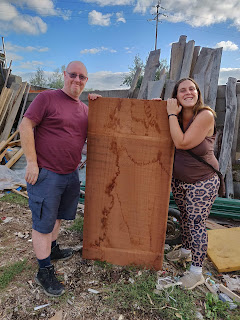 Over a period of a week or so, we took the opportunity to work on it when we could at the manor house, depending on weather, other plans etc and with Liefs amazing guidance and kind use of his tools, we got it planed down, then sanded and roughly cut to size. 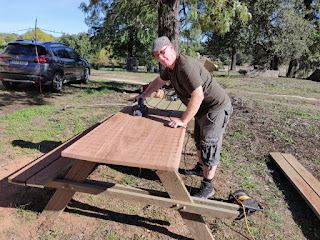 Then we decided to use Linseed Oil on it so gave it plenty of coats of that. As we were now ready to do the final cuts to size and then the cut outs for the hob & sink, we decided this would be easier at the manor house, plus there was a huge Halloween party to prepare for, so made sense to move Daisy there. 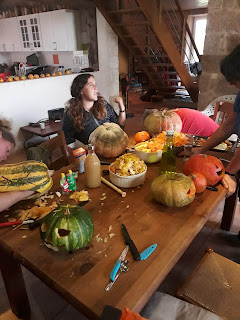 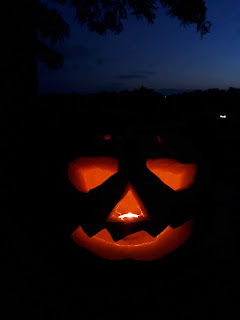 The party was brilliant, we had hand carved pumpkins, made lots of decorations, had some yummy food and got to meet a lot of old and new friends, and had plenty of beer to cause a hangover the next day.
But with the party out of the way, the job for the week was to finish the worktop, and make the final cuts to size was first up. Once that was done, we oiled some more, sanded some more and then thankfully Lief gave us a hand to do the plunge cuts with the circular saw for the appliances. I then finished them with the jigsaw, and got the cuts sanded right down so they would fit nice and tight.
Then there was more oiling and a couple of smaller cuts to make it all fit, and then we could try it in the van. 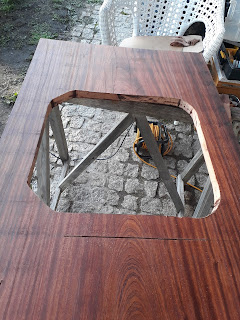 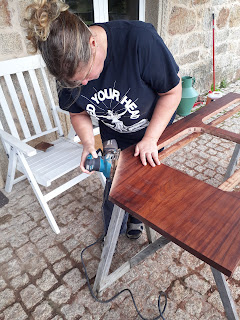 After a small couple of tweaks needed inside Daisy, it was ready for installation. Except I noticed another issue with potential disaster written all over it. I had brought all the gas & plumbing fittings from the UK, and made an error on the location of the new hobs gas connection, how many compression fittings I needed and what type. After a frantic search locally for the right part, to no avail, I managed to figure out a way to do it with the existing fitting and the new fittings, by cleverly re-routing the new gas pipe. 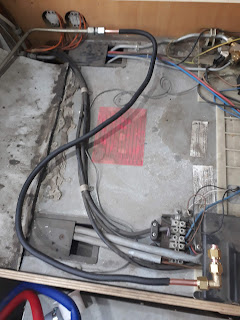 There was also another issue that when I removed the old plumbing, the waste pipe went to a odour trap which had sheared off with age, I knew there was no chance of getting a replacement here, so had to try find a longer waste pipe to connect to an existing T junction.. and yeah ended up buying a washing machine pipe and adapting it to fit, which works well and will do till I get the proper parts in the UK.


So once it was all connected up with the gas and tested, I then did the plumbing which is simply just connecting the hoses and making sure there is no leaks. But as expected, there was another issue where the pressure is no where near as good as before, and we need to try bleed the system as probably got air trapped in the system, which we cant do until we get to mains water to try it.

But at last it is fitted, and it looks amazing, and works... 3 hobs instead of 1 working one too, ok so it's not perfect and there is a couple of marks we could do without seeing, but it was done with love and by hand 😁 x

HERE is a link to the photos from the work we done to it so you can see the transformation!

So after the issues we've had with the batteries, charger, cockerel, inverter, car accident, laptop, gas, plumbing.. plus I seem to have hurt my back and just getting over a sore throat, we are surely due some good luck soon!

Tomorrow we go to see another few bits of land and over the next couple of weeks we will see a bit more of central Portugal, I will need to return for my laptop being sent back and then hopefully we can go do a couple of workaways before Christmas.

Love from us x