It's blog time again but to be honest we haven't really been up to much so it might be a bit of a dull one.

We looked at about 8 bits of land around the Penamacor region, they were all overpriced for what they offered but it was an interesting day seeing what was out there. We then moved off to look around more of the local area and as neither of us were getting amazing sleep on the thin mattress we had in Daisy, we also had the idea to visit an Ikea to find a mattress topper or similar.

Our random travels took us to South and across into Spain where we stopped at Alcantara, it wasn’t a pretty town although the Roman bridge on the way on was pretty cool. 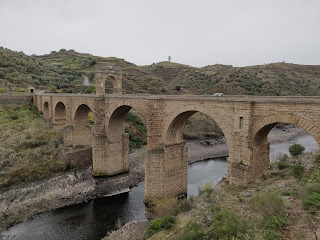 We were going to stay at the scrappy wasteland carpark near the free motorhome aire but a google search had shown a 4-star hotel down the road that did a deal on dinner, a nights stay and breakfast and as we had been craving a decent shower, bed and food it didn’t take us long to convince each other that we deserved this treat.
The hotel has been built inside a 15th century convent and was quite impressive, they had kept a lot of the original features and our room was huge. The food was a set menu and some of the pairings were a little odd but overall it was very nice, and we had a comfy nights sleep and after multiple hot showers we both felt much better.

Our travels then took us to the industrial town of Badajoz, where google was telling us there was an Ikea. Sadly it was really an Ikea collection point and not a proper store which rather screwed up our plans and we dithered about for a day or so going back and forth across the border before staying in Spain and heading off towards Seville, which was a city we both wanted to visit and it had an Ikea. 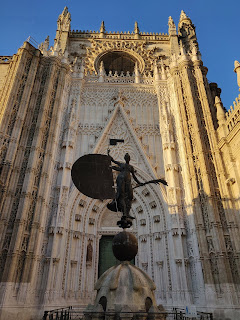 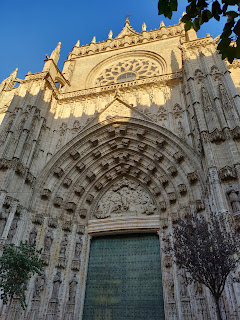 Parking for a huge motorhome in the city centre is a big no go but as there is a good metro system so we found parking next to one of the stops and 10 mins later we were in the old town.
Seville is beautiful but is very touristy with lots of tapas bars, and horse and carts to claim your money as you walk around but we’d earmarked a few sights and a few bars to visit and so set off around the city. Sadly, the cathedral was closed for mass but from the outside it is still absolutely gorgeous however the highlight of our evening was a small tapas place called Bar Alfalfa.

A tiny place that only had 5 bar tables and it was already packed when we turned up, but we slowly edged our way to the bar and waited to see if any tables would become available. Having grabbed a table we then ordered 4 little tapas plates which were all amazing and reasonably priced and I kinda wished we’d just stayed in there all night, needless to say we did a tapas bar crawl and there are many quirky, expensive and nice places to eat and drink in Seville but none as nice as that first place. 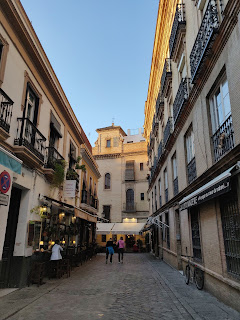 Next day, not very early as we licked our wounds from the previous night, we headed towards the coast and back in the direction of Portugal, from here the plan was to travel along the Algarve to see what drew hundreds of brits every year.

The Algarve is not somewhere I was eager to visit to be honest, but I was looking forward to warmer weather and with average temps being mid to high teens it was definitely warmer.
We had a few stops along this south coast with on the first being on a beach near Huelva where after a few mins of leaving the van door we were beset with mosquitoes and so spent the next few hours swatting any we saw. Of course, we didn’t get them all and our first few days along the coast were itchy ones.

We had actually got a mattress topper in Seville we had been waiting for a decent park up and clear skies so we could lay it out to cut up, we didn’t get that until Faro but having got it all cut to size and installed it was one of the best purchases we’ve ever made, although none of our sheets now fit exactly and our curtains are now too long around the bed!
Faro is a nice little town, expensive to eat and drink out so we did most of that in the van, but they did have the Luza light festival on whilst we were there, which was very cool to walk round. 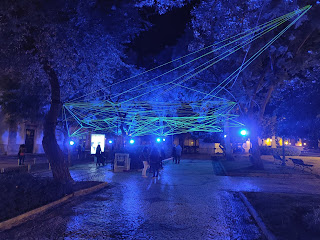 Winding our way along the coast we stopped at a gorgeous park up right on the beach near Quarteira and we wasted a couple of days here just listening to the waves and watching the other vans come and go.
The only reason we left was because we needed to refill and empty water / toilet etc which dictated the need to pay for a campsite.
Campsites or paying aires in the Algarve are huge gravel soulless areas where they sandwich as many paying motorhomes in as possible, but they do have them in most towns so are a necessary evil. I’m not sure I understand the mentality of people that come and stay for weeks at a time in these places, especially when you can wild camp in some much nicer areas. 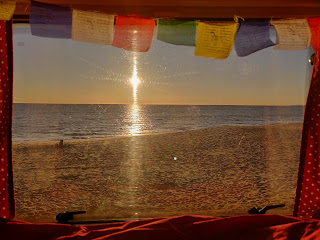 Albufeira was not much further along the coast and here we managed to waste nearly 4 days parked in the carpark for some apartments which were under construction. This was mainly due to meeting some other English nutters, the beer being cheap and the tunes cheesy, so 2 of those 4 were spent with crippling hangovers. We also received the very upsetting news that we’d lost one of our festival family friends and we were both heartbroken.

I shot my immune system in Albufeira and was now full of lurgy so for the next few days we drifted along the Algarve to Guia, then Alvor and Lagos. The coastline along here is stunning in places but they have started to clamp down on wild camping so many coastal carparks now restrict campers to no overnight parking, hefty fines are apparently handed out if you risk it. 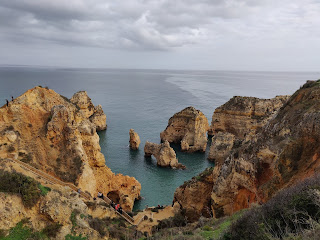 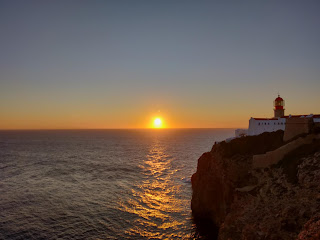 A quick trip inland and some rainy days highlighted again that our batteries were not really performing very well and after losing power one night we paid for 24hrs power and Paul hit the internet to scope out a solution. New batteries were ordered and delivery to Porches in the Algarve was arranged, we’d have to play about fitting these new batteries, but they should improve our power on no sunshine days considerably.
We’d also booked flights back to Scotland for the 8th Dec so the next week was going to be spent making plans, traveling to the far south west corner of Portugal and then back to Faro where our flights were leaving from.

My thoughts on the Algarve now I’ve been here a few weeks aren’t really changed, I still prefer central Portugal which seems more honest and Portuguese but it’s not all bad down south. We even managed to find a supermarket selling tattie scones, square sausage, black pudding and Irn Bru!