Whale Sharks, Quads and the end.

So, we eventually got to Bato and having chatted to another German couple on the ferry we had our fingers crossed that whatever was picking them up would have room for 2 more. As it turned out they had a whole minivan to themselves so taking us was no issue. I'm not sure the driver fully understood what we wanted but when we reached their hotel, which was only about 10 mins from ours, the owner explained and he delivered us directly to our hotel for the price of 500php, which from port to door is quite cheap.
Our accommodation was JD beachhouse, the owner, Joy, was there to greet us and completely understood how frazzled we were. She showed us to our room, got us a beer and said if we chose a dinner from the menu she would go and fix it for us. It was just what we needed and her small but very comfortable guesthouse was perfect. I could hear the waves crashing just below the large shared veranda and as everyone had a private table outside their rooms this is where you enjoyed your breakfast and dinner. 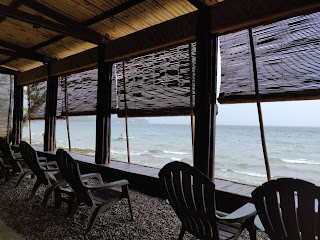 As I’d been chatting to Joy for a few days I’d asked her to sort out the whale watching tour for us, which she kindly booked in our name for the next day with Peters Dive Resort. So no lie in and an early breakfast as we had to be at the resort for around 7:30am.
Peters dive resort is one of the top local dive centres and I had already inquired as to if they had a room for us but they were fully booked, so I knew it was probably going to be a full boat and as they take the boat out for the whole day you get a packed lunch included in your price, which Joy had arranged for us the previous night.

I just have to say that Joys breakfast at JD beachhouse was amazing. She'd learnt from dinner the previous night that I liked spicy food and so added a bit of spice to her Pork Tocino, which then elevated it to perfection. I might contact her and ask for the recipe.
So, breakfast scoffed, tricycle down to Peters, snorkel equipment sorted and we were soon wading out to the boat. The weather was actually overcast and slightly chilly but excitement levels for us and the other 15 people were high.
Some people on the boat were diving as well, not with the whale sharks as that is prohibited in the bay but at another spot nearby. We actually went there first so the we got a chance to have a nice snorkel before heading further round the coast to find the sharks.  At a small village we stopped to pick up 7 small spotter boats and these were dragged behind us along a large rope. After going a bit further, the boats all get dropped off on a circle and the spotters all stick their heads in the water and see if they can see a shark below. If they spot one they want their oar in the air and our boat makes a bee line for them, drops us close and then leaves again. 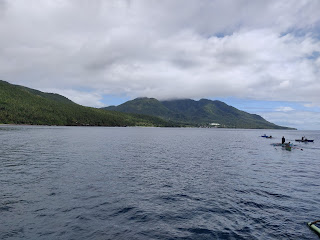 You then have a bit of a frantic 5 mins orientating yourself in the water, seeing where the shark is and the swimming like mad to catch up to it but the reward for doing this is swimming above a huge graceful creature as she goes about her business. We saw two that day and it was just incredible, one of the best experiences of my life.

We returned back to base about 4pm very happy with our days outing. We were so impressed with the set up at Peters that we decided to book for 2 dives the following day, which meant another early start, but the diving here comes highly recommended.

It was only after we got back and chilled out for an hour or so that Paul started to feel sunburnt and his back was coming up an angry red colour. I was too but nothing compared to him as he’d been snorkelling all day without his t-shirt on. We didn't want to eat at our resort again and as there aren’t any restaurants in town yet we decided to walk to a nearby resort.
It took around 30 mins to walk to Southern Leyte Divers along the main road into town and we really hoped we’d be able to get a tricycle back but after scoffing some expensive but tasty Dutch food we found no tricycles lurking about so had to walk back as well. This town hasn't really geared up for tourists yet, a lot of the locals don't speak English and most visitors once on resort stay on resort so don't need ferrying about.
By the time we got back Paul was in agony and as his back was starting to blister we realised diving the next day was out of the question. He convinced me to without him and so the next morning I set off on my own. I must say the diving was phenomenal. I had a dive instructor to myself and the amount of fish I saw on my two dives were incredible. I'm so sad Paul missed it. 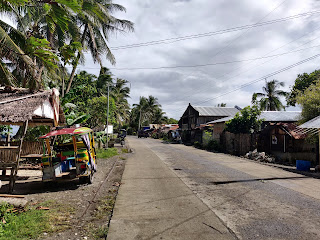 We had an early morning alarm call the next day as we had to get to Hilongos for the ferry to Cebu and the ferry we needed to be on left at 9am. As Paul couldn't walk with his backpack on we arranged for a tricycle to take us to the terminal in town where we could catch the first jeepney to Massin that was about 5:30am.
Unfortunately somewhere along the line wires had been crossed and it turns out the first jeepney doesn't go to 6:15. We couldn't wait that long so had to pay 500php for a private jeepney to take us, which was really expensive but what else could we do.

Once in Massin we clambered aboard another jeepney that would take us all the way to the pier in Hilongos, this was a much more reasonable price of 120 but it did take on other customers as it trundled its way up the road. Tickets to the ferry have to be purchased from the ferry company office, which helpfully isn't at the port but a pushbike tricycle said he'd take me for 20php.
Ferry tickets purchased we were soon on our way to back to Cebu. So in summary, Padre Burgos had been a bit of an effort to get to and get away from and it had definitely been expensive but seeing the whale sharks in such a natural location without other tourists and the diving for me far outweighed any bad points. I kinda hope it stays being a bit off the beaten track.

We were only in Cebu for a few hours so as soon as we landed we headed straight a across to the airport for our flight to Legazpi.
We had originally planned to go to Legazpi as it was close to Donsol, which is a hot spot for whale shark snorkelling but as we felt we'd done this in the best location we could we opted for just dossing about in town for a few days, letting Paul's second degree sunburn heal and maybe getting on ATVs (quads) and going near Mt Mayon. 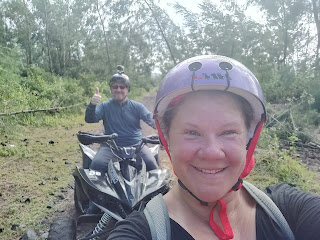 We did end up on ATVs, which I was a bit apprehensive about but was such fun. It's not as risky as you think and the terrain is actually very easy, the hardest bit being the riverbed which is within the first few mins of the outward journey and here we both got a little wet.
Sadly, the top of Mt Mayon never showed herself whilst we were there. I hear it’s a bit like Mt Fuji in Japan, in that you rarely see the summit and when you do even the locals are excited by it. 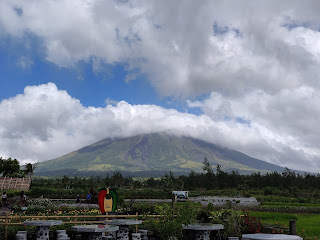 We didn't really do much else whilst we stayed in Legazpi, every day we went for happy hour beers at the only bar in town, 21 Amendment, and by the 3rd day the waitress would pretty much have our beers waiting for us. We ate at all the recommended food places, braved various jeepneys in to the city centre and wandered around all the shopping malls and generally relaxed. Our time in the Phillipines was drawing to an end and before long we were heading back to Manila for 1 night in preperation for our journey home.

Paul had booked us into a cheap and cheerful hotel near the business district and the plan had been to check in, doss about for a bit before going out for farewell drinks and food. It was a complete surprise when I noticed the grab taxi we got from the airport pulled in to a very swanky hotel drive and my door was opened by a top hat wearing man saying welcome to the Raffles Makati. Having tried to get a Singapore Sling at the Raffles in Singapore I knew how posh this hotel was and Paul had pulled out all the stops and booked us a suite here for our final night. 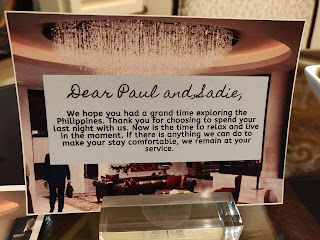 I have never been in such a luxurious hotel. The foyer had huge crystal chandaliers, the floors were marble and each suite had a butler they could call on if they had any special requests. We had a huge suite with two queen sized beds, a seating / dinning area, a hallway and a massive bathroom with freestanding bath and shower.
At Pauls request they had supplied a cheese platter with wine in the room and we were also entitled to the tea and cakes in the Piano bar or Long bar any time during the afternoon. I must admit I pigged out. I swanned about for the afternoon in my dressing gown sipping wine and eating cheese, I then went down and demolished their sandwiches and exquisite cakes during tea, had several deep cleansing power showers and still found room to have dinner at the buffet dinner in the evening. It was the best way to end our trip and completely different to everything else we had experienced in the Philippines.
And then all of a sudden it was over, we were packing and heading out to Manila airport one final time.

My thoughts on the Philippines are mixed, you can't fail to be in awe of the beautiful landscapes and sea life that they have there and the people that you find in the smaller villages and towns are friendly and wonderful. However the touristy bits and the seedy bits you encounter in-between leave a bad taste in your mouth and it is such a huge place that I really wouldn't recommend trying to fit as much as we did in.
I would love to re-visit and explore more of the the Central and Eastern Visayas, which included Siquijor, Cebu and Southern Leyte and if it was safer I'd venture even further south as those islands are meant to be stunning but for now I'm happy I can say I've done them.