A month back in the UK, but not as we normally know it!

By paultrademark - April 13, 2020
It's been exactly one month today since I have been back in the UK and probably the strangest month I have ever experienced in my life.
This is a very short account of my month here to date.

Deaths from Coronovirus were increasing both here in the UK and worldwide, Boris had just told us that “Many more families are going to lose loved ones” on the day I got back into the UK.
By now, it was becoming clear to me that my original plan to head north to Scotland, via some friends, was going to have to change as it was just now too risky to go and visit my elderly parents.

I arrived in Newhaven mid morning and my plan was to head along to Brighton for the night, parking up in our usual spot in Preston Park and then meet my brother for a few drinks that evening and hopefully a couple of mates too.
As I couldn't park there till after 4pm for free, I found a nice little spot next to a lake outside Brighton and parked up there for a few hours rest. 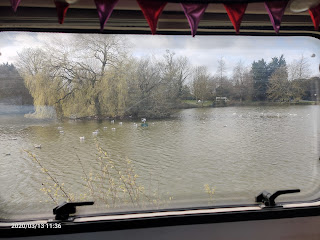 Moving along to Brighton, I went to an Asda Superstore and that was my first experience of the 'panic buying' I had been reading about on the online news.
People were shoving whole packs/trays of items in their trolleys - soups, pasta etc instead of just the usual 1 or 2 packets.
Shelves were pretty bare and the essentials like toilet rolls, soap, nappies were all gone. It was unbelievable and I grabbed the few things I needed and quickly left.

After parking up at Preston Park, I actually started to have second thoughts about going out into Brighton that evening as I was worried about being in a large density of people. I actually cancelled my planned meeting with my brother as that was early evening, and didn't want to risk rush hour.
But later on I decided to just head out to meet an old friend Peter, so jumped on a bus into town and met up with him and a few mates in the local Brewdog pub.
It wasn't particularly busy, we had a good evening chatting and drinking, I had my bottle of hand sanitiser with me being constantly used and the staff were cleaning tables and surfaces regularly. 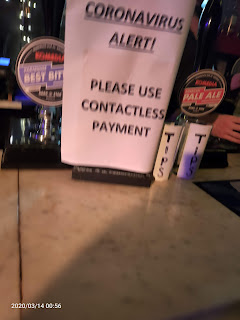 I had also arranged to pop in to a nearby club called Komedia, to see another friend Dave doing his DJ thing there called Ultimate Power, which is a night dedicated to power ballads. It was a small club, not that busy but it was a brilliant night and I stayed till the end before getting a taxi back to Daisy. 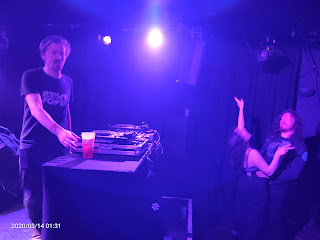 The next afternoon I travelled slowly up towards Birmingham to go and visit another friend for the night. Jane (who visited us in Malaysia and Laos on our big SE Asian adventure) had said I could park Daisy on her drive for the night, and I had a good catch up with her and her mum. We even went for an amazing Nepalese meal nearby, which was delicious.

It was now Sunday, and what's better to do on a Sunday afternoon than the famous Sunday Club in Ripley. So I headed up there and parked up at the infamous Beehive and grabbed a couple of pints before later meeting up with Robert & Sam and little Lenny.
Myself & Robert then headed out for a few pints that evening and little did I know then, but that was the last pub I was going to visit for some time...

My next planned stop was to visit my close friends Ian & Michala in Nottingham (who I have known for around 13 years) for a few days, then head up to see more friends in Leeds, then onto Middlesbrough before heading to Fife to see the family.

It was whilst in Nottingham that Coronovirus was now the main only news story and having been declared a pandemic just days earlier, people were now taking it even more seriously.
Boris Johnson had delivered his first of the daily briefings to the UK (March 16th) and of course they still happen today (April 13th)

The last time I saw them both was in December at our friends funeral, it was good to catch up and we had a good chat about our adventures over the winter and the ongoing situation.
However what was clearly evident to them both was that the previous 2 weeks without Sadie was now seriously getting to me.

And with the current situation worsening with countries putting lock-downs in place, closing borders etc I was increasingly worried about her and her plan to stay in Portugal then go to France before coming back to the UK.
I wasn't sure when (or at times - even 'if' in my head) I would ever see her again.. at times I was a bit of a mess!

To be brutally honest, and it's not something I admit to, I wasn't coping very well mentally and would burst into tears randomly, unable to discuss it openly with anyone and just wasn't my usual self.
Luckily I have some very good friends here who I could speak to about things and offer support that is nothing short of remarkable. Words will not be enough to thank them both for sure for what they have done.

Sadie's plan was being thrown about the place too, with ferries and flights being cancelled to & from the UK which was affecting Lisa & Rich's plan to return. It felt at times to me as if she was going to be stuck there for months!
Eventually they did manage to change their journey to get back earlier and just in time to allow Sadie to hastily re-arrange her plan, sadly having to take the decision to cancel her trip to France and head straight back to the UK.
It was not without drama too as her flight was changed a couple of times, and she actually got one of the last scheduled flights out of Porto back to the UK, meaning we had to collect her from Gatwick.

This was such a relief to me and after a week of me being in Nottingham, Sadie was safely back with me in Daisy.

And at least we got to spend her 40th Birthday together which wasn't originally planned to be. 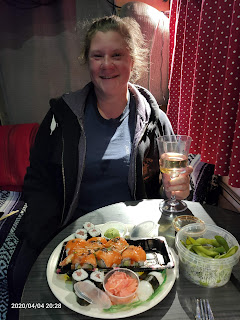 Am not going to write much more about the last 3 weeks here and what has been happening.
You all know what is going on around about us and where we are currently with over 11,000 dead in our country and rising.

But this has affected us all hugely as individuals, as a country and us personally as we have now had most of our event work cancelled for the summer up to August now, with the rest depending on where we go from here.
It's a massive financial hit, so much so it has the potential to change our whole plans for the next 12 months!

But at least we have our health, we are together now and we are still with our extended family who are looking after us for which we are forever grateful

Look after each other 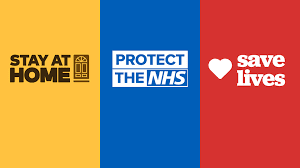