By paultrademark - July 13, 2020
Another month has passed and the situation has changed for us both and Daisy... here's a short account of what has been going on.
Just over a week ago we moved on from our friends drive/house as restrictions were lifted on staying away overnight and with campsites being allowed to open etc, we felt it was the right time to get our independance back.

It's nice to be able to give them their lives back after giving up so much for us, as I have mentioned before we will be eternally grateful for what they did to help us out during lockdown 💗
Not much has happened in the last month, though slightly more than previous months! We are both still in the same jobs with mine looking like it's now extended to September and Sadie is still working around 20-25 hours a week which is still ongoing.
Its nice to see the savings not going down now, but slowly going back up and we need to decide soon what our winter plan is and try budget for it.
A few weeks ago we did have a BBQ with some friends round in the back garden which was lovely, we got some Tomahawk Steaks which Ian cooked amazingly and went down well with a few beers! 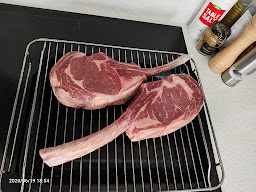 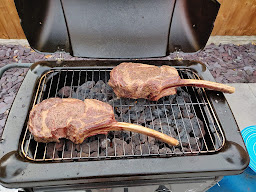 I mentioned in the last update about getting the cushions re-upholstered and another couple of bits of the interior done.
So I checked a load of local companies I could find on Google and sent around 8 emails out with photos attached to get a rough quote.

Only about 4 replied, 1 couldn't do it and another 2 were well over £1k, but one guy called Russell said he could do it for around £440. I invited him to come around and look at what was required and we also decided to get an additonal couple of cushions for the end under the window to make it a bit comfier, and the total quote was £500.
We agreed on some fabric and he took one half away to do and would swap over after around a week, which suited us fine. 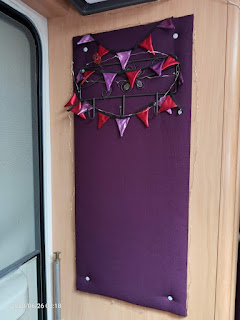 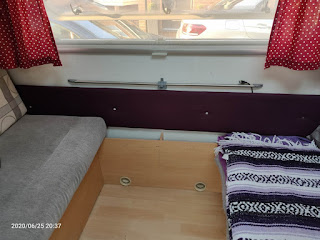 In the meantime, I decided to re-do the 2 boards we had with some of the leftover curtain fabric by just pulling it over the existing fabric, stretching it and stapling the new one down.
As you can see in the photos above, it worked really well and was good to get rid of more of that horrid grey we have had to look at for 4 years now!

Anyway a week later Russell came back with one set of the cushions and they looked fantastic, and he took the other couple away. And 2 days later, we then got them back and we are delighted with the finished look! 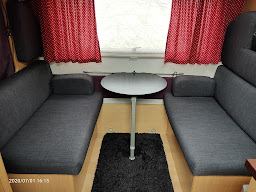 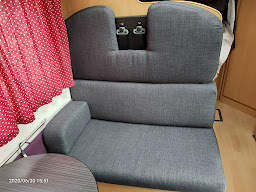 We also had Daisy in to get some work done as mentioned previously, for her upcoming MOT and have found a friend of a friend who has a garage that has a pit which makes working on her so much easier.
Although not technically due till October (as a 6 month extension was applied in April), we want to get it done well before then.
So far we have had a few bits done and still have a few more bits to get done too, however the garage that did her recent service seem to have put a lot more down than was actually needed!
This week we have also come across a leak with our power steering, so hoping it's not too bad and will get that looked at asap too.
I have also ordered and fitted a new Victron MPPT Solar Controller for Daisy which is way more efficient than our previous cheap PWM one.
We can also monitor the stats easily and I think it has made a difference over the last few days too. 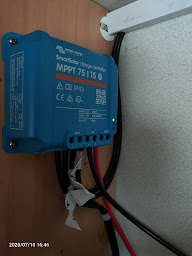 The last week has seen us search out some quiet areas to park up overnight whilst maintaining our work commitments.. easier said than done but so far so good!

Oh and at the weekend we managed to find a lovely country pub to have our first proper pint in a beer garden, it was long overdue! 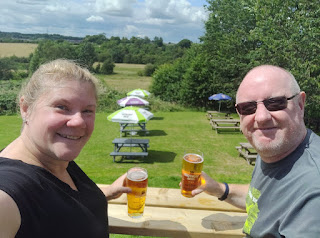 Cheers all and stay safe
x