Yet another short monthly update, it's now 5 months (22 weeks) since being back in the UK so here is what's happened since last the last blog.

We splashed out and got some new crockery and new saucepans, frying pan etc as we were fed up using the ones we had since getting Daisy which actually came with her! 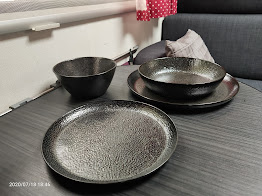 Daisy got a few more bits of work done for the MOT, including front brake pipes & hoses, caliper and the previously mentioned power steering issue was just a pipe which saved us a lot of money.

Anyway she passed her MOT first time, with only a couple of advisories which will be sorted soon, so that's a relief and now means her MOT is a July date which suits us better as we will be in the UK around that time each year.

So with the MOT done and the leak fixed, we took off up to the Peak District for an overnight stay at a pub campsite, just to get out of the city for a bit and also I had a couple of DIY jobs needing doing which required hook up.

First up was a small metal rod to be fitted, so by drilling in from the bathroom side via a little covered up hole for the bathroom unit, I was able to get it in place and now forms what we are using for a spice rack. 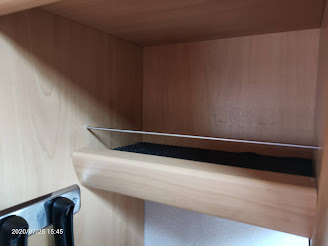 Secondly we wanted to cover up the gap we have under the table that used to form part of the old bed when Daisy was a 4 berth van. It used to just gather dirt and by putting a new shelf in, I would also like to get some additional USB sockets flush fitted there at somepoint. 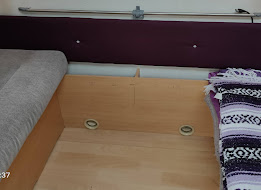 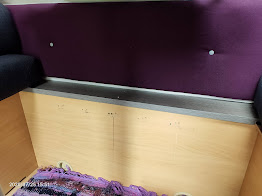 So with a bit of wood sawn up, it puts a lid on that gap and the plan was to paint the front facing section too.
It was nice to get away for the night too, and we ate in the pub and had some lovely gin in the van too. 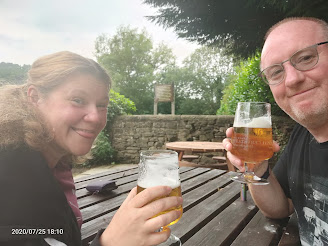 The following weekend we visited our friends in Ripley and went for a few drinks and then back to theirs for the christening of their new hot tub. It was brilliant fun and then after a few bottles of wine, it was bed time to face the inevitable hangover the next day!

The past couple of weekends have been busy too with mixed emotions over them both though...

Firstly we had a camping trip for our friends birthday weekend, with about 35 of us booked into a farm up near Ashbourne. It was a great weekend and was so good to eventually see our friends in a field at last this summer, with most not been seen since last year and was much needed for everyone! 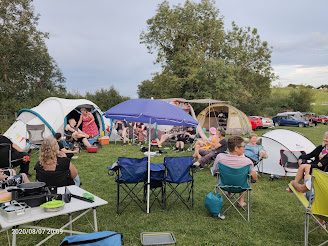 Sadly though, a couple of weeks prior to this trip we got the terrible news that one of our festival family had suddenly passed. Steve was a lovely man, who was actually due to go on this camping trip and he will be missed by many.
Many of the friends we had longed for so long to see, would yet again come together the following weekend to celebrate his life up in Harrogate where he lived with his loving family.
We had travelled up the previous night and stayed in Daisy at a country pub where we had an amazing meal too and hopefully we can return to the area as it looked beautiful and would love to see more. 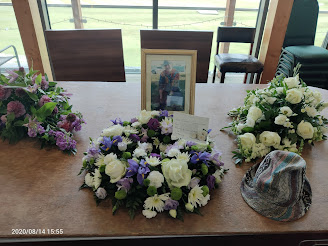 In between those 2 busy weekends, we had also being doing more work to Daisy's interior, just trying to freshen her up a bit after all these years.

We had got some paint to do the wood under the new shelf, and Sadie had also wanted to brighten up the cupboard middle bits for a couple of years, so we got some paint and glitter finish for over the top of it. 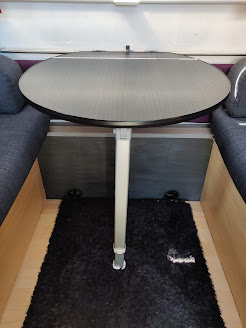 As you can see on the photo above, we painted it a metallic silver finish and also got two new black vents to replace the beige ones. It's made quite a difference to what it was before as seen in the photo further up the blog.

For the cupboards, we picked a brick red matt finish, but once the glitter effect was done on top, it would turn out to be a glossy finish anyway. 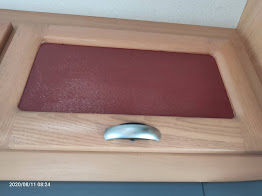 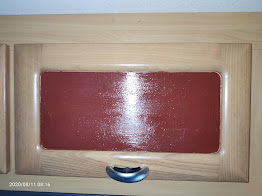 We tested it out on one of the ones in the front cab area, so if it didn't work then we could think of a plan B. However it did turn out ok and we are currently in the middle of getting the rest finished (there is 12 in total, so just over 1/2 way there!)
She is starting to look a bit more homely now, it's only taken us 4 years to get to this point 😂 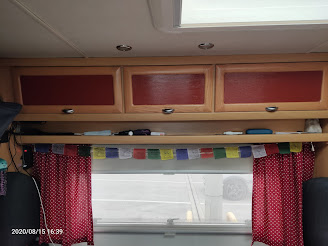 So that's pretty much what we have been up to, lots more stuff done with Daisy and a couple of trips out of Nottingham.
Work situation for us both is still the same, looks like I will be at the bank till around the end of September and Sadie is at Morrisons until around mid September.
She has booked her flight to France and hopefully all will go well and it goes ahead as planned.

Oh nearly forgot, I surprised her with a cheeky night in the local Doubletree Hilton were we had dinner with breakfast too... it was a nice little bit of luxury and I got an amazing smug pudding face 😋 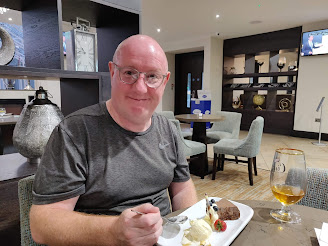 Let's see what the next few weeks brings to us... stay safe everyone
x