Final goodbyes in SL and back to the UK

Sorry this update to the blog is ridiculously late but in the spirit of completeness I will update it on our final weeks in SL and the journey back to the UK.

When we left Bentota we had about 2.5 weeks before we were due to fly back to France and so we'd divided this up into a week back at Unawatuna and then a few days in Hikkaduwa, leaving a large chunk of days where we'd be based in Negombo with easy access to Covid testing for the return flight. We caught the train straight back down to Unawatuna and obviously we'd booked back in with Milinda and Manouta at Coconut Style for our final week, which really felt like we were just coming back to stay at a friends house. The beach road hadn't changed as much this time and really we were just here to say a final farewell to the crazy bunch of people we had been lucky enough to make friends with over the past few months. So after a week of snorkeling, eating in our fav restaurants and a fair bit of drinking we left, again on the train up to Hikkaduwa, 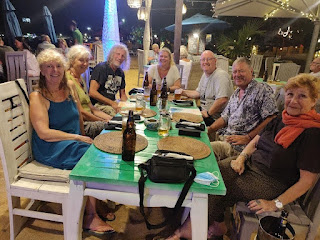 We'd had a flying visit to Hikkaduwa when we first arrived in Sri Lanka but I really wanted to snorkel more from this beach and so we booked a room at Main Reef guest house right on the beach. The room was nice and had an amazing sea view and was comfy enough for 4 days, I will warn anyone swimming directly outside this guesthouse that it is mainly used by surfers because the waves can be big and this also means there is a strong rip current. Not to be underestimated! Swimming and snorkelling was fantastic on the upper section of beach, north of the Cinnamon hotel. I have to mention the Crab Curry I had at Cool Spot restaurant because it was absolutely amazing, I was worried it was going to be tiny fiddly crabs as the price wasn't very expensive and our experience in Jaffna had put me off but this was just one large crab and it was awesome. 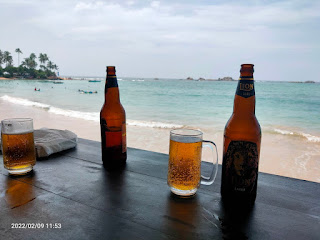 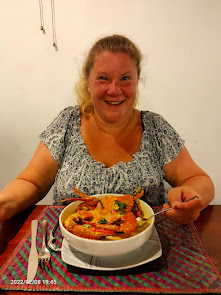 Next stop was Colombo, I think we were meant to be here for 24hrs but we actually ended up staying here for a 4 nights. In-between the French government not making their minds up about what re-entry Covid test they required and Sri Lanka running out of tests in anywhere that wasn't the capital we decided to stay in Colombo so we had the best chance of getting what we needed before our flight. As it turned out France decided they didn't require a test from vaccinated passengers so we had a 4 day 5* vacation at the end of our Sri Lanka trip for no reason. I can't say I hated it though as between the comfy bed, hot rain shower, buffet breakfast, posh dinning options, happy hour bar and 24hr TV it was a little slice of comfort we don't often get.

Not much to say about the flight back to France except I'm never eating plane food again as we both came down with a horrific case of food poisoning almost as soon as my parents got us in the house. As we hadn't eaten anything for the past 24hrs except plane food it was definitely from the Air France flight from Sri Lanka and it wrote off the next day for us both. I felt so sorry for my parents as they had looked forward to having us back so much and planned a lovely meal out the following day, which neither of us could face. We did fight back to full fitness, and had a lovely week after that saying goodbye to my family and sorting Daisy out before hitting the road. 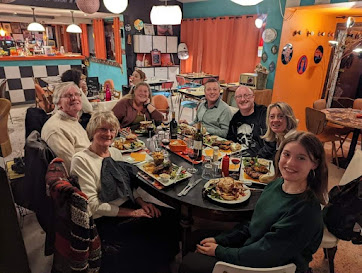